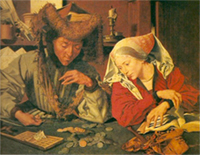 The Money-changer and his Wife (Florence, Museo Nazionale del Bargello)

What were the 1 Percent of quattrocento Florence doing with their gold florins?

Buying exquisite works of art by Botticelli, Beato Angelico, and the Della Robbias.

The current, and timely, exhibition at the Palazzo Strozzi in Florence through January 2012 shows how the modern banking system developed in parallel with the most important artistic flowering in the history of the Western world.

Money and Beauty: Bankers, Botticelli and the Bonfire of the Vanities is co-curated by art historian Ludovica Sebregondi and Tim Parks, writer, translator and author of Medici Money – Banking, Metaphysics and Art in Fifteenth-century Florence.

I know of Parks through his entertaining books on the expat life Italian Neighbors and An Italian Education. I’m intrigued to learn he’s a scholar of Italian art history.

According to the program notes, “the exhibition is conceived as a ‘duet’, in which the two curators present different – and sometimes opposing – views of the exhibition’s content. [They] aim to provide the visitor with an opportunity to look at art from a cross-disciplinary perspective involving economists, politicians and diplomats. It examines the story of how the Florentine Renaissance grew from the supposedly open, but more often actually hidden, relationship between art, power and money.”

The Florentine bankers practiced usury on a scale the world had never before witnessed. But, unlike today’s 1 Percent, they at least left us with The Birth of Venus and countless other treasures.