Daniele Baruffaldi is a man’s man: bald, barrel-chested and strong. He’s as quick to laugh as he is to roar. Daniele is one of only 60 farmers certified to breed and raise the famed cinta Senese pigs. Cinta refers to the white “belt” marking around the shoulders of their otherwise black bodies. Senese means from Siena. This noble breed has deep roots. It is identifiable in Ambrogio Lorenzetti’s 1348 fresco “Effects of Good Government in the Country” still viewable in Siena’s Palazzo Communale. 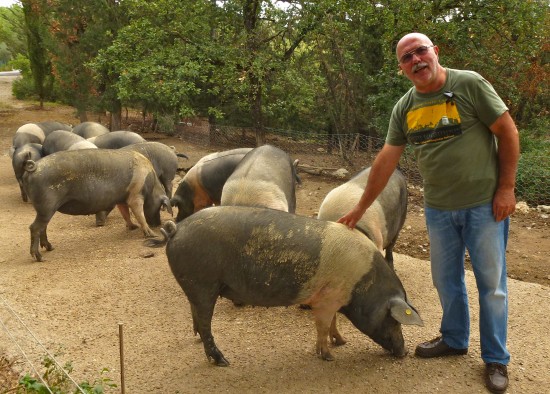 The breed became nearly extinct over the last 40 years when Italian farmers imported the large white breed from the United Kingdom. These hogs grew to maturity quicker and produced leaner meat which was in marketing vogue at the time. The large white was crossbred with the cinta Senese to produce the grigio Senese. It made economic sense: faster growing meant less feed, quicker to market, leaner. “But it doesn’t have the flavor of cinta Senese,” declared Daniele.

Before long, the global population of pure-bred cinta Senese had been, according to Daniele, reduced to only two males and 20 females.

The Consortium to Save the Cinta Senese 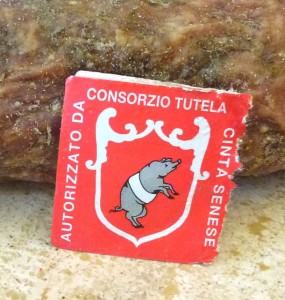 In 2000, a Consortium, known as Consorzio di Tutela della Cinta Senese (Consortium to Save the Cinta Senese), was established in Siena. The group brought orderly processes to promote healthy breeding and to safeguard and certify the authenticity of resulting pork products in the marketplace.

Daniele showed us some of the stock—including newborn piglets—and described feeding techniques.  He pointed to the fields where his pigs rooted for chestnuts and acorns. I asked him if he ever had problems with wild boar coming into the fields and disturbing his hogs.

“No,” he said, wagging his index finger left-to-right, “never.” “Any chingiale invading my property suffers from a fatal illness—malatia del piombo.” The translation: bullet illness. 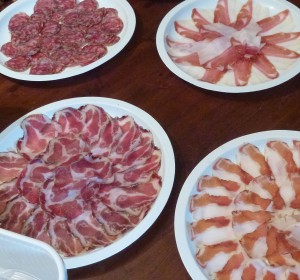 Prosciutto, salame, and assorted salumi are produced by time-honored methods.

Then we walked to his home for a simple lunch featuring his products. Vittoria, his wife,  welcomed us to a table with six different platters of specialties: lardo, guanciale, neck meat, prosciutto from the shoulder, and a couple types of salumi. “But before anyone eats the prosciutto, you must have the lardo…and let it melt on your tongue. No lardo, no lunch!” Daniele commanded.

The lardo, thinly sliced pure cured back fat, did melt on my tongue, with a slightly sweet flavor and smooth consistency that I preferred to butter.

We all earned the right to continue with the rest of the meal. The flavors were extraordinary. The pork meat flavor soared when complemented by the sweet fat.

You might be wondering whether cinta Senese products are available in the United States. To the best of my knowledge (and Google’s) the short answer is “no.” However, I did learn that a California farmer, Matt Taylor of Front Porch Farm, was finally able to import some cinta Senese stock, and will begin breeding the pigs as cinta Sonoma. His target markets, starting in 2014, will be restaurants and high-end sausage makers.  Read about his work here.

Azienda Agricola Baruffaldi Daniele Allevatore di Cinta Senese does not have a website but you can email or call to arrange to visit the farm.

Charges 25€ per person, with a 150€ minimum for a tour…so come with a group of at least six to save money. Daniele does not speak English, but his son does.