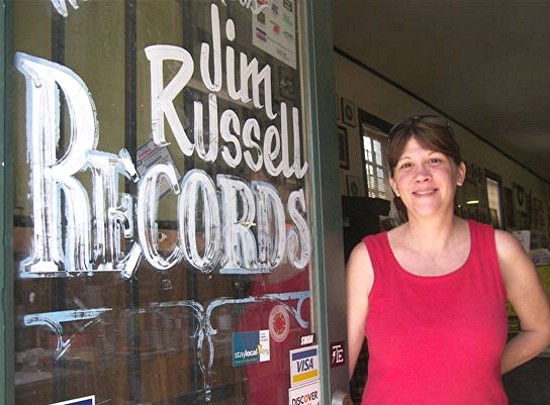 As if on cue, in walked the Italians. They were a 30-ish couple, casual but stylish, great sun glasses and both sporting nifty miniature backpacks. They began looking around. In a few minutes the woman came up to put some purchases on the counter while her companion continued to shop.

I overhead them speaking, so I asked her in Italian how she found the store. She said that they had heard about it, didn’t know exactly where it was, but were glad when they spotted it on Magazine Street. She said that her husband loves American music. He was still engrossed in bins and shelves along the far wall.

It made me think back to the days when I lived in Florence, and how my Italian friends adored American music. I remember catching a Miles Davis concert in Bologna with Sandro Bertoni and Piero Chiostri. Miles owned the arena. Piero had his eyes closed and every once in awhile would nod and say “Questo é jazz.”

And anyone who follows Paolo Conte — the great Italian songwriter, pianist and vocalist — knows, he rejoices in American music. He expresses his love of jazz in Sotto le Stelle del Jazz and we catch some New Orleans, Professor Longhair style keyboard in Boogie Woogie.

I recall a story about Louis Armstrong. He had a gig in Milano and was asked why Italians had so much respect for American jazz musicians, the same kind of respect given to Verdi or Puccini. “I think the Italians figure our music’s the same,” Satchmo said. “We play from the heart.”

Denise brought me back from my musical reverie as she asked me to bring the Italian woman over to the center of the store.

“Look, here’s Italy,” she said pointing to the aftermath of decades of foot traffic on cement. Layers of worn paint had created a rough circle of blue with a brown shape suspended from the top edge. Could it be? Yes, it looked like the Italian boot stepping demurely into the blue mini-Mediterranean puddle. Tess came over, too. And we all laughed.

I asked Denise how business is.

“Not so good. Traffic is off since Katrina, and that storm wrecked our roof and we don’t have the money to fix it and no insurance. Our taxes are up since the storm — about five times what we used to pay — and we’re just not making that kind of money. It’s real hard.”

Bruce, or other music lovers, if you catch this piece, give Denise a call. She probably has that long-lost record you’ve been wanting — and you would be music to her ears.