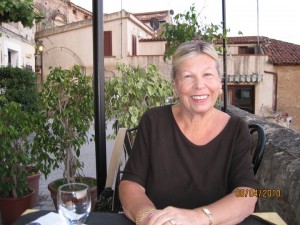 Joyce Heitler in the southern hill town of Pisciotta.

Retired from teaching kindergarten in Chicago after 45 years, I, too, have an Inner Italian.

My husband Frank and I went to Italy about 11 years ago with my son- in-law Renato, who was born in Italy, to see his sick uncle in Tuscany. The uncle lived in a beautiful four-story castle with antique furniture.

We decided to learn Italian so Frank looked up schools on the Internet and found a small language school in Pisciotta, about one hour south of Salerno. The photos looked fabulous and we signed up for a three-week total immersion class. After one week, I fell in love with Pisciotta and the people. Being the impulsive person that I am, I decided to buy an apartment there.

Not many apartments were available for sale so when I went to church I prayed that I would find a place. When I left church, a man, who had heard us speaking English, approached us. His name was Agnello, named after the patron saint of Pisciotta. He had worked in New York for 12 years and then moved back to Pisciotta. I asked him if he knew of anyone who had a house for sale and he said, “Yes, me.”

We fell in love with his apartment. Every window, including the bathroom, had a view of the sea. My prayers are not usually answered that rapidly. The next day we went to the bank, had the money transferred, and signed the papers with the notaio the day before we left.

I love golf but the sport is almost nonexistent in southern Italy. A number of years ago when I heard about the Country Club of Salerno I was ecstatic. I have never had a car in Italy so I took a bus, then a train, and then a taxi to the golf course. When I arrived, I discovered it was closed on Tuesdays but I was able to talk the greenskeeper into letting me play. When I got on the course I realized it was only three holes and I had to go around six times. I have played it a number of times since. 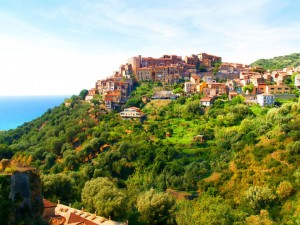 Pisciotta, not far from the vast Cilento National Park, offers views of the Tyrhennian Sea to the west.

The golf course is connected to the Quadrifoglio Village in Pontecagnano which has a big pool and is on the beach. I play with a number of women whom I’ve met from Salerno including a policewoman, a psychologist, and a teacher. (There’s joke in there somewhere.) Last year, I played with a man who has a boutique pasta company in Pennsylvania. Sometimes I stay overnight so I can play golf for two days.

One evening, I was sitting on the hotel patio waiting for the advertised music to begin. As you know, nothing is guaranteed in Italy or on time. I asked the housekeeper when the music would begin and she said they probably canceled because there were not many guests at that time. I told her I was really in the mood for music. She said her 14-year-old daughter would sing a song for me and asked what I wanted to hear. I figured everyone knows O Sole Mio so I suggested that.

I was treated to the most outstanding version of that classic I have ever heard. She told me her daughter had studied voice and piano since she was six. I named five different operas and she was able to sing an aria from each one. It was an amazing evening–one of the many wonderful experiences I have had in Italy.

Connecting with Her Inner Italian 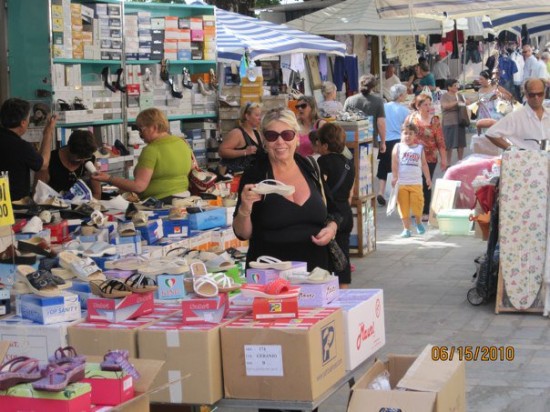 Shopping in the weekly market in Pisciotta.

Back home in Spartansburg, South Carolina, I work six nights a week at my son-in-law Renato’s  restaurant as a hostess. I organize Italian themed music evenings such as Pasta & Puccini, Verdi & Vitello, etc. Between courses, we play Triviata (Italian opera quizzes). After  dinner, the emcee tells anecdotes about the composer and introduces each aria with singers who are vocal teachers at the local colleges. We have also shown the movie Big Night and recreated the dinner from the movie.

I have returned to Pisciotta every summer for three months since buying the apartment and love it more every time. I have so many wonderful stories and memories of this fairy tale town and its people and am looking forward to many more.