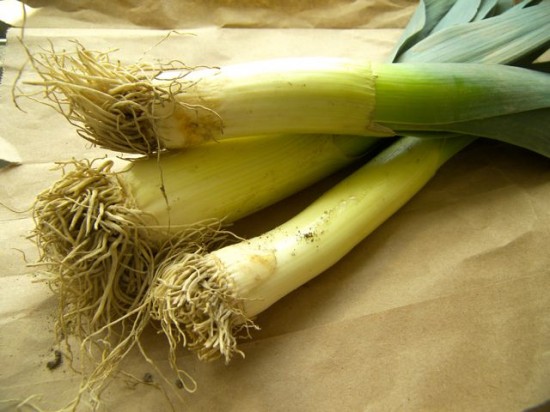 Soil clinging to the leeks' exterior is easy to see. Not visible is the grit between each thin layer.

If you rinse a leek as you would a scallion, you’ll have a finished dish seasoned with grit.

Leeks contain dirt inside their layers, not only on the outside skin, according to Vegetable a Month.com. “Leeks grow layer upon layer, so any dirt surrounding a layer, gets trapped inside as the leek grows outward. It doesn’t help when wind blows or rain splashes more dirt inside the layers.”

It’s not hard to clean leeks thoroughly so here’s the way to do it. 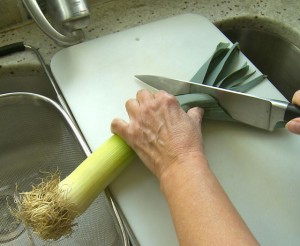 Cut off the tough green end of the stem and discard. 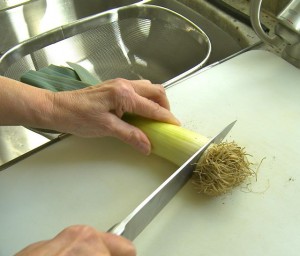 Cut off the root end and discard. 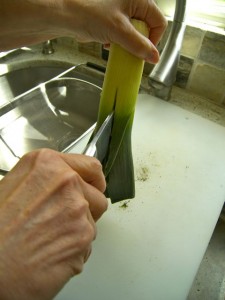 Hold the leek by the root end. Starting about 1 inch above the green portion, slice through the leek. Turn the leek 90 degrees and slice again to create a cross. 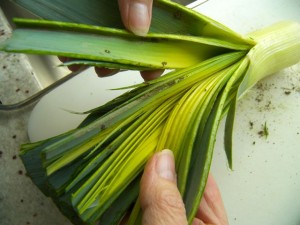 The dirt is now visible. 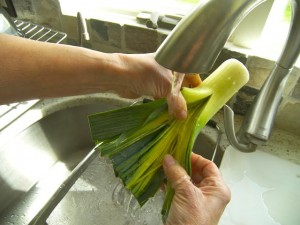 Give the leek a cold shower, using your fingers to direct water under each layer. 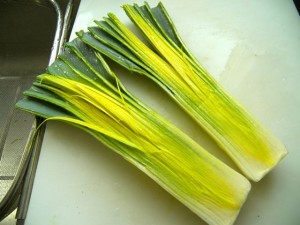 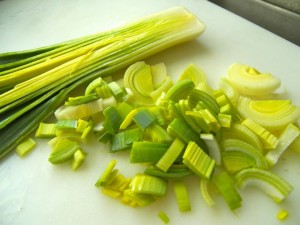 Now that you have all these spanking clean leeks, let’s cook a spring dish with them.
Braised Leek and Asparagus
Serves 4 to 6
1 leek, trimmed and washed
12 ounces asparagus, sliced into 2-inch-long pieces
2 tablespoons water
1 tablespoon extra-virgin olive oil
1/8 teaspoon salt
Black pepper
4 to 6 lemon wedges
Cut the leek into quarters lengthwise. Cut the quarters into 1/4-inch thick slices.
In a medium skillet, combine the leek, asparagus, water, oil, and salt. Cover and cook over medium heat for about 4 minutes, or until the asparagus is tender.
Remove the lid and cook over high heat for 1 to 2 minutes, if needed, to cook off any remaining liquid. Season with pepper. Serve with the lemon wedges.