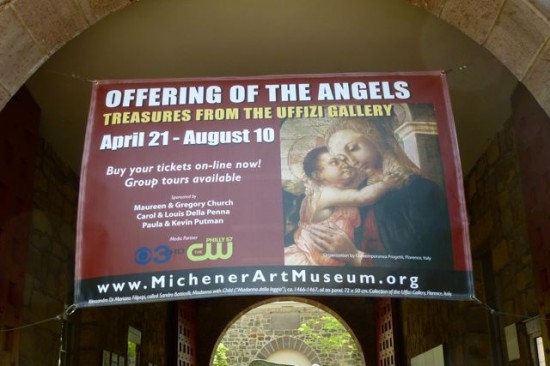 Treasures of Florence fly to Bucks County on the wings of angels.

Imagine possessing so many gems that there’s no more room in your jewelry case for a flawless gold and radiant-cut diamond necklace. You’re forced to stow it in a box in the attic.

No space, either, for the marquise-cut ruby bracelet. Upstairs it goes.

Those pear-shaped sapphire ear drops set in silver filigree? No spot for them in the case. A shame they’re out of sight. 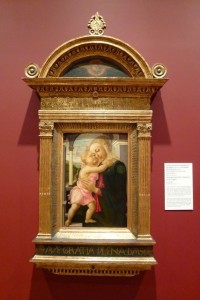 Such is the scale of holdings of Florence’s Uffizi Gallery that many of its master works languish in secret rooms. But every so often, the Uffizi is able to bring out these hidden, but not forgotten, assets and share them. Now is such a time with the Offering of the Angels exhibit, through August 10, 2012, at the James A. Michener Art Museum in Bucks County, PA.

Walter and I were privileged to attend a recent preview tour conducted by co-curator Diane Cole Ahl, Ph.D., professor of art history at Lafayette College. Our group savored Botticelli’s Madonna with Child–which would be the equivalent of that hidden diamond necklace–Pietro Liberi’s Annunication–the ruby bracelet–and Jacopo Da Empoli’s The Creation of Adam–the sapphire earrings. 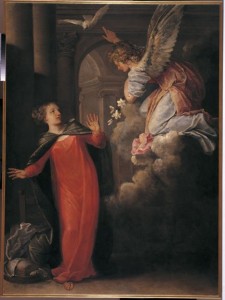 Liberi achieved the vivid red of Mary's gown by working with the finest pigments. He painted in Venice, the first port of call for trade ships from the East, and had first pick of the paints.

“All of these artists are well known by scholars,” Ahl said, emphasizing the breadth of the 45 paintings and tapestries in the exhibit that includes works by Tintoretto, Titian, and Signorelli.

Mounted on walls of Tuscan-hued Chianti and olive, the art works relate scenes of Old and New Testament Biblical narrative, progressing from the creation of Adam to the resurrection of Christ. In each room, Ahl had to urge us to move on to the next. “It’s impossible to take your eyes off of them, isn’t it?” she said.

Indeed, viewing these gems up close conveys the power they surely exerted to instill religious devotion in the faithful from the Middle Ages onward.

« A Voce
Max, Wally and Lampredotto »