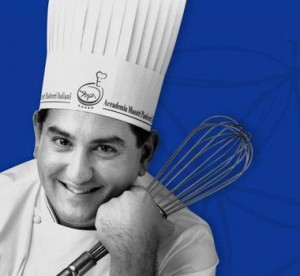 Pastry Chef Salvatore de Riso is as big a celebrity in Italy as Emeril LaGasse is in the U.S. He is a regular on the popular RAI Uno cooking contest program Prova del Cuoco and has authored several cookbooks.

De Riso’s principal pasticceria is on the main square of Minori on the Amalfi Coast. Pleased to find myself in Minori recently, I visited the De Riso shop in hopes of meeting the great chef. Sadly, he wasn’t there—but his signature Ricotta e Pere (ricotta and pears) torta was. My sweet consolation was whipped sweetened local ricotta with cubes of Williams pears encased in a hazelnut crumb cake. Sublime! 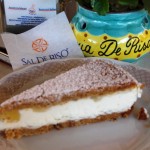 I did meet Salvatore’s brother Alessandro who told me that he and Sal grew up in a family of gelato makers in Minori. As a young chef, Sal apprenticed in some fine hotel kitchens on the Coast before opening his first pastry shop in 2000. His success was rapid and phenomenal.

De Riso operates a production center in Tramonti, in the hills above the coast, and other retail shops in the Campania region, Rome and, improbably, St. Petersburg, Russia.

The 44-year-old de Riso has seemingly more awards and commendations than Italy has churches. Among them: He was the first pasticciere from southern Italy to be admitted to the Accademia Maestri Pasticceri Italinai and, just this month, the group named him Best Pastry Chef of the Year, during its XVII Symposium in Brescia.

Next time you find yourself in Minori, sample la dolce vita with de Riso. 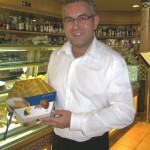 Alessandro de Riso is an ambassador for the sweet life.