The house of Rossini's birth is now a museum dedicated to the composer.

If you’ve done a Google search today, you already know from the doodle that it is Gioachino Rossini’s birthday. The great Italian composer came into the world in the Leap Year of 1792. Luckily for me, Martin Kettle of The Guardian did the math on just what number anniversary this is. Depending upon whether you count every year or only the leaps, Rossini is either 220 or 53 (there are no leaps in 00 years).

Think you don’t know any Rossini works? You do. The theme from the classic TV program The Lone Ranger is The William Tell Overture. Director Stanley Kubrick also used the William Tell in the film A Clockwork Orange along with La Gazza Ladra (The Thieving Magpie).

As a fan, I’ve visited both Rossini’s birthplace and his tomb. The former is a two-room second floor apartment in the placid Adriatic coastal town of Pesaro. The latter is in the Basilica di Santa Croce, a veritable pantheon of cultural luminaries, in Firenze. 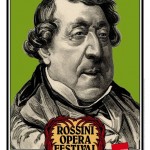 The triumphant arc of his life and career is summed up in those two locations. From his impoverished beginning, Rossini’s talent launched him into the musical stratosphere. He was a rock star of his era. Every August, Pesaro hosts The Rossini Festival continuing to shine a spotlight on their hometown genius. Check out the 2012 program.

Today, I’ll be listening to one of my favorite pieces—the overture from La Scala di Seta (The Silk Ladder). This wonderful recording is a performance of Arturo Toscanini conducting the BBC Symphony Orchestra in 1938.

Do you love Rossini’s work? What’s your favorite?