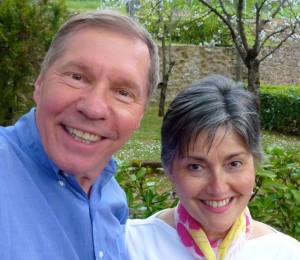 Walter and Sharon Sanders help you celebrate your Inner Italian. Write to Walter at yourinneritalian@gmail.com

It started with a friendship. Tony Savino is the oldest of 12 children growing up in Glenview, Illinois.  Spending time at his house, listening to his Dad, Mario, hold forth on everything from food to sports was exciting.

I was invited to a couple of holiday meals . . . . and they were like nothing I’d ever experienced. I was staggered by a New Year’s feast at his nonna’s: the huge table covered with food-the likes of which I’d never seen before. Back then I didn’t know what eel was. I just knew I loved that first taste. And the only thing louder than the dinner conversations was the laughter.

I remember a warm fall afternoon sitting in his grandfather’s car. He was a pepper salesman who smoked rum-soaked cigars. The sun filtered in through the closed windows. The aroma from tubs of peppers in the back seat, blending with cigar vapors, was earthy, alive and almost visible. Could this be how Italy smelled?

At Northwestern, I majored in English. But I found myself drawn to Art History. There was a professor named Olan Rand whose specialty was Italian Renaissance art and I took a number of his courses. He was goofy in an elitist sort of way, and spiced up the Florence slides with recommendations for his favorite trattoria near the Bargello, the Uffizi or Santa Croce.

Florence was my home from 1971 through 1975. I had gone there to study, but ended up designing and selling leather goods for the American market at the Leather School in Santa Croce. I was hired by Marcello Gori who over time became my unofficial zio and mentor. He demonstrated the intrinsically Italian talent of blending art with commerce. And it was at the Leather School where I met Massimo Melani. I’ve enjoyed a friendship with this savvy Tuscan ever since.

One day in 1974 an attractive, well-dressed young woman, a stunning American tourist, came through the show room. I had the good sense to enquire about her dinner plans. She was free. We had a splendid meal at Trattoria Benvenuto where I knew Gabriella and Loriano, the proprietors. Over a steaming bowl of cacciucco I began the most important relationship of my life.

Italy was the common attraction that led us to each other. In 1978, Sharon and I married under the watchful eyes of Della Robbia cherubs in the Medici Chapel within the Basilica of Santa Croce where we first met.

Fast forward to 1998. The Sanders family now includes daughters Emma and Tess. During a three-week vacation to Italy we return to Florence for a celebration of our 20th anniversary. The girls “remarry” us with a spontaneous renewal of our vows. I’m able to track down Padre Franchi who performed the original marriage. I berate him for not being Pope. He berates me for not being president of the United States.

We’ve lived in different places since then. We return to Italy as often as we can. The long range goal is to live there at least a portion of the year.

Until that time, we engage our Inner Italians no matter where we are. It brings us warmth, happiness and for me, the distant memory of pepper and cigar smoke.