After four years of unwedded bliss, Sharon and I decided to get married. And because Florence was at the core of our relationship, we wanted the ceremony to take place where we had met. So we began to plan a wedding at the Church of Santa Croce. It was to take place immediately after we finished the small tour we were conducting through Tuscany.

One would think that lining up a small, modest wedding ceremony—even in Italy—would be an easy task.

Arranging our wedding turned into a two-headed monster. We had to work through imposing bureaucracies of both the church and the Italian government.

Anyone who has dealt with Italian authorities will confirm that the Italians have perfected the art, science, and process of bureaucracy. There is a ritualistic formality, a pomposity linking the self-perceived authority of the bureaucrat with the act of officially stamping a document with the appropriate bollo, or stamp of approval.

When Sharon and I started the process of arranging to marry in Italy, we were astounded by the intricacies. Because we were living in the U.S. at the time, we had to have all necessary documenti translated and stamped for approval by “connected” bureaucrats stateside.

We accumulated all the necessary documents: birth certificates, baptismal papers, first communion records, confirmation notices, parish affiliations, voter registrations, proof of a felony-free life, on and on. We had them all duly translated and stamped by the designated officials. Of course, there were fees at every turn. When all was said and done, we had assembled nearly two pounds of official documentation. I packed it all for final approval in Florence.

The church stuff was a snap. The clerics at Santa Croce carefully reviewed the information and stamped their approval on the stack of documentation. 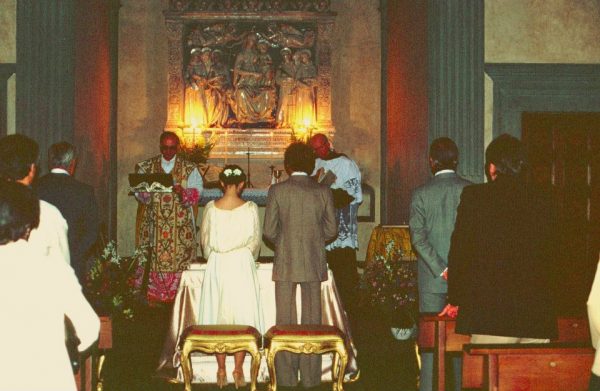 Luca Della Robbia’s “Madonna Enthroned” graces the altar in the Medici Chapel of the Basilica of Santa Croce.

At the Commune di Firenze–the city hall–the story was different.

A week before our wedding, I arrived bright and early at the Commune offices housed in the glorious but imposing Renaissance Palazzo Vecchio. I must put “bright and early” into the context of a government employee’s day. The hours are not exactly grueling. Start at 8:30 A.M. and finish at 1:00 P.M., Monday through Friday; take off the entire month of August, as well as every imaginable civil and religious holiday.

Promptly at 8:30 A.M., I took a seat in the waiting room, placing the bulging packet of documenti on my lap. The minutes ticked by. Finally, at 8:50, my guy paced through the waiting room. I swear I could smell the cappuccino on his breath as he authoritatively boomed “buongiorno” to his administrative assistant.

Another ten minutes passed before I was ushered into his spacious office. His massive desk was as neat as a pin, save for an open briefcase and a three-tiered rack of rubber stamps—there must have been 75 of them—poised for action at the front of his desk.

He welcomed me and inquired as to my request. I cheerfully explained about the pending marriage, the Chicago-based official translations of all pertinent documents, and my eagerness to present them all for his kind and authoritative approval.

He motioned for the packet and I handed it over. He opened it, neatly spread the documents across his desk, and carefully perched a pair of reading glasses on the end of his nose. He focused intently on the array. For 20 minutes, he diligently examined the stamps and signatures on each document. Then he gathered them together, put them back into the envelope, slipped off his glasses, looked at me somberly and sighed.

“I’m so sorry,” he said. “But you lack a number of critical documents. In their absence, I have no choice but to withhold the city’s approval of your wedding.” 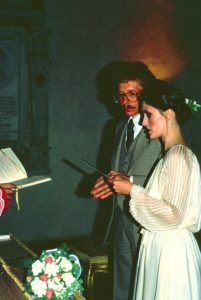 I was dumbfounded, but I kept my cool. I produced an officially generated checklist of required documents and explained that every document on the list had been presented. A wry smile, a slight shrug of the shoulder, was his official response.

“Very well,” I said. “I will return with all the required papers.”

There was nothing else to do. The wedding was less than five working days away. I couldn’t hope to gather anything from the U.S. within that period. But without the Commune’s approval, the Church would not allow us to get married.

As the days passed, I grew more and more concerned. Padre Franchi was booked. The food and wine had been ordered. Our friends were all invited.

Marrying Italian-Style: Timing is Everything

Planning in desperation to appeal to the bureaucrat’s sense of romance, I returned to his office on Friday, the last business day before our scheduled vows. I had spent the morning running errands and arrived at the bureaucrat’s door later than I had hoped, at 12:40 P.M. The administrative assistant remembered me and I sought her help in making sure that the official would see me before leaving for lunch.

She ushered me in immediately. The official welcomed me again. The massive desktop was clear, his briefcase already packed. He looked as if he was ready to make an early exit.

After the ceremony in the private courtyard of the Pazzi Chapel.

He motioned for the bundle. I presented it. It contained the very same papers—only reordered for appearance’s sake. Before I could enter my plea for mercy, he had rushed through the stack, not even taking the time to spread them out as he had done before. He looked up at me and beamed. “Very impressive, in fact you have presented more documentation than you actually need.”

With newfound haste, he stamped and signed all the papers, presented me with an invoice payable at the cashier on the ground level, and while ushering me out the door wished me a long and happy marriage blessed with many children.

Out in the dazzling sunshine in Piazza Signoria, dazed but triumphant at the positive turn of events, I bobbed in a river of Florentines flowing by me on their way to lunch. Suddenly I understood.

Nothing, absolutely nothing, is allowed to interfere with mealtime in Italy.