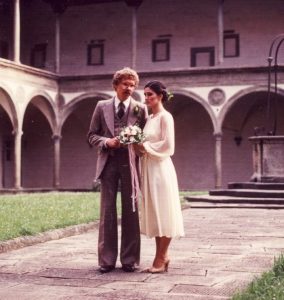 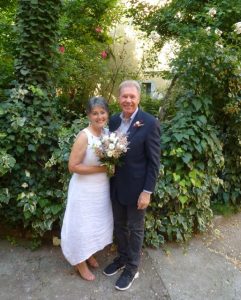 When Sharon and I married in 1978, we had to jump through secular and ecclesiastical hoops to get to the altar in Santa Croce’s Medici Chapel in Florence.

Forty years later, all we had to do was cross a small piazza to the parish church of San Michele Vetere in Cremona.

As we planned our May 2018 trip to Italy, we intended to renew our marriage vows but, unlike four decades ago, we had no formal plans.

Sharon was looking to sharpen her Italian language skills and found an immersion program through La Studentessa Matta. Sharon reserved back-to-back sessions with Elena and Gianna in Bergamo. She lived with the teachers in their homes and did EVERYTHING in Italian.

I planned to meet Sharon after her programs and we would spend a couple of weeks savoring life in a small city Italy. I flew on mileage reward tickets (thank you, United and Lufthansa) and had to travel around available dates.

That led me to spend some time in Milano then in the Lunigiana of Tuscany with old pals James and Martha of Wandering Italy and Martha’s Italy.

My Wife Has AirBnB Radar

Sharon has the knack for finding stellar AirBnB accommodations hosted by spectacular people. She has consistently demonstrated that talent on four continents and counting.

Once we chose Cremona (grazie Fred Plotkin for the recommendation in Italy for the Gourmet Traveler) as our base in northern Italy, she worked her magic once again.