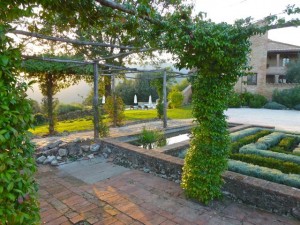 Only a short time earlier in Fiesole, I hopped into my friend Giovanni Melani’s Volvo. He’s offered to drop me off in the village of Montestigliano on his way home to Grosseto. We headed south past Certosa, San Gimignano, and then, south of Siena, the sultry female voice of the GPS purred “Gira a destra a 200 metri.” 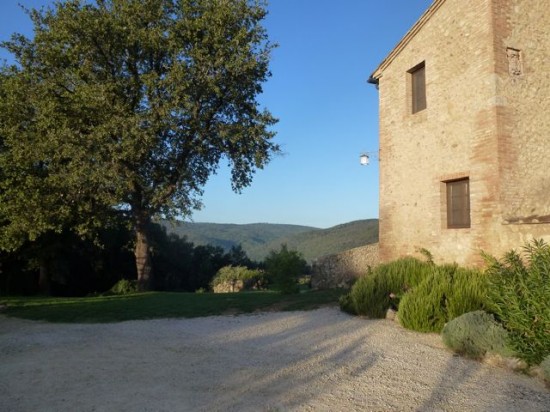 No signage indicated a lodging establishment. We crossed a river and continued to climb the hill. Then we entered what looked like a farm village. We drove past a broad courtyard flanked on the north by a large villa, and on the south by an immense work building.

We jumped out and strode across the courtyard, then stopped in our tracks. The courtyard was a vast terrace overlooking a broad valley. Siena sparkled some 15 kilometers away. The only sound was the wind and Giovanni saying “Bellisimo.”

In the office, I met British-born Francesco, the on-site, go-to guy for the Donati family’s Tuscan properties. Francesco explained that we were in the Montestigliano property–a seventeenth-century farming hamlet that is still an operating farm as well as a hotel. “But now, off to Villa Pipistrelli!”

We drove more than a mile over a gravel road lined by cypress, oak and sycamore trees deep into forested territory. We reached a clearing high over a rolling valley and I saw two stone buildings that appeared to be hundreds of years old. 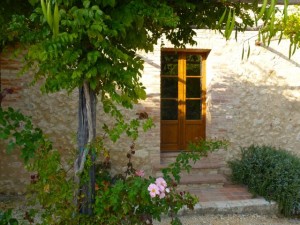 Your entry to a magnificent Tuscan retreat.

We entered the courtyard of the larger building through a carved stone arch. Francesco unlocked the door and we passed through at least three centuries, and a cozy foyer, into a large, modern kitchen. Lots of work space, a six-burner gas cooktop with oven, deep sinks, dishwasher and a massive stainless steel refrigerator beckoned guests to cook up their own Tuscan feasts.

Francesco took me on a quick tour of the five bedrooms with en suite baths, a fusion of traditional Tuscan colors and motifs with decorative upgrades that gave each unit a unique feeling. A couple of communal areas give guests space for lounging and reading. I’d love to be at Villa Pipistrelli during the winter to take advantage of the fireplaces. 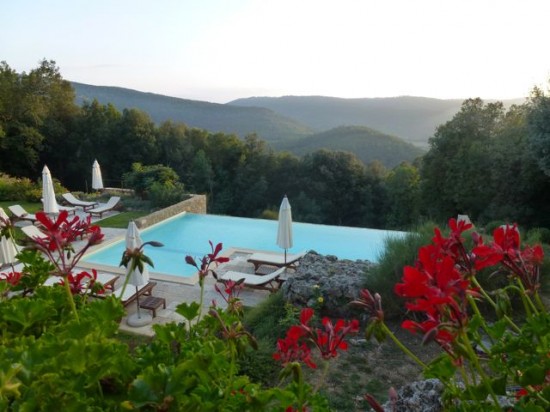 Stunning vistas from every perspective.

Double doors open on to the Zen deck with western views overlooking the infinity pool and the distant hills. I cannot imagine a more ideal setting to toast a Tuscan sunset. The grounds are dotted with  courtyards, lush gardens, and wisteria-and-trumpet-vine-covered pergolas that invite you to play and dine under the sun, shade or stars. Every component embraces the Pipistrelli philosophy of serene engagement with nature.