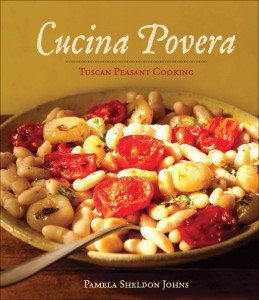 As cultural tourists, who among us isn’t dazzled by the Tuscan sun? We see ourselves feasting beneath its rays: Platters laden with antipasti, pasta, bistecca all fiorentina, Sangiovese wine, and sweets . . . la dolce vita.

Prior to WWII, those who worked the land did so under the mezzadria, a class system of wealthy land owners and poor share-croppers. The devastation of the war and its aftermath only made times more challenging for these agricultural workers. 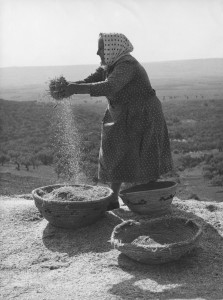 “From these hard times came recipes that have endured and have even become exalted,” Johns writes. “More than the recipes, la cucina povera, “the cooking of the poor,” or “peasant cooking,” is based on the philosophy of not wasting anything edible and using a variety of simple techniques to make every bite as tasty as possible. It is a cuisine of ingenious creativity in using next to nothing while maintaining a reverence for everything.”

Virio Neri, the calzolaio (cobbler) in Montepulciano recalls, “The very best, was the pan’ santo. We would dip some dry bread in broth, then put boiled cavolo nero (dinosaur or lacinato kale) on top, and a blessing of oil. We’d have that for dinner, and sometimes also for lunch. My mother would say, ‘Corpo pieno, anima consolata,’ which means ‘If your stomach is full, your spirit will be calm.”

People grew pod beans and fave, potatoes, and other root vegetables. They foraged the woods for mushrooms, wild greens, and herbs. They hunted for cinghiale (boar), rabbit and other game. Chestnuts were dried and ground into flour for polenta or the crêpes called necci which were cooked on stones over a wood fire. There might be eggs if you were fortunate. Florentine Miriam Serni Casalini fondly recalls a neighbor with a pollaio (chicken coop) on his roof. There might be pig parts cast off by the landowner. These were transformed into salame or pancetta which would go a long way to flavor many starchy dishes.

Although Johns describes the research for this book as “often heartbreaking,” she ultimately paints a portrait of those who not only survived but thrived. Franca Magi, the owner and cook at Trattoria Tripolitania in Sarteano says, “We had less, but we were better off; the food was poco, ma buono, simple and full of flavor. We appreciated what we had more because it was harder to come by.”

For a taste of Cucina Povera, try these dishes from Johns’ book.

This hearty vegetable casserole needs no meat to make a satisfying meal on a cold night. If the small, squat onions known as cipolline are not available, you can substitute 4 quartered sweet red onions or 4 heads garlic with the tops removed.

2 pounds cipolline onions, about 1 1/2 inches in diameter, trimmed and peeled

Preheat the oven to 400°F. Place the potatoes, onions, and fennel in a roasting pan. Add the olive oil and toss well to coat. Season with salt and pepper to taste. Roast, turning occasionally, for 20 minutes. Add the tomatoes and roast another 10 to 15 minutes, or until the potatoes and cipolline are fork-tender and golden brown. Add the beans, garnish with thyme, and serve at once. 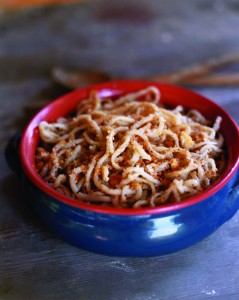 The topping for this pasta is sometimes called poor man’s Parmigiano and represents cucina povera at its most frugal. Women would save every bread crumb until there were enough to dress pasta, garnish soups, or flavor roasted or grilled vegetables. For this recipe, the breadcrumbs are tossed with garlic and spicy red pepper flakes that have been sautéed in olive oil. The finished topping is crunchy with a wonderful, spicy flavor.

1 pound pasta (such as pici, recipe follows), bucatini, or spaghetti)

In a large pot of salted boiling water, cook the pici for 3 to 4 minutes or until al dente. If usingr the bucatini or spaghetti, cook according to the package directions.

Meanwhile, heat the oil in a large skillet over medium heat and sauté the bread, garlic, and pepper flakes until the crumbs are golden. Using a slotted spoon, transfer to paper towels to drain and cool.

Drain the pasta, add the topping, and toss. Serve at once.

Pici is a hand-rolled fresh pasta from the southern part of the province of Siena. Each strand is rolled by hand. My friend Lina Mazzetti’s secret? Warm water in the dough.

1 tablespoon extra-virgin olive oil, plus 1 teaspoon for rubbing on the dough

Mound the flour on a wooden board and make a well in the center. Add the water, 1 tablespoon of the olive oil, and salt to the well. With your hands (or a fork), work the flour into the liquid from the sides to make a smooth dough. Clean the board, lightly flour it, then knead the dough for about 15 minutes, or until smooth and elastic. Lightly rub with the remaining 1 teaspoon olive oil, then cover with a damp towel or plastic wrap and let rest for 20 to 30 minutes.

Flatten the dough and cut into thin strips. Roll, one at a time, on the board with the palms of your hand into a long, round strand, like a fat spaghetti. Lay the strands out on a tray liberally sprinkled with semolina or cornmeal to keep them from sticking.