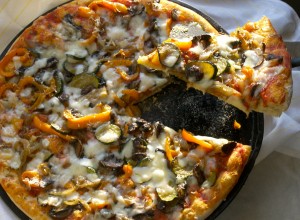 An impromptu pizza: the wonderful product of kitchen foraging.

A recipe can be a useful thing.

A recipe is useful when we just have zilch inspiration about what to serve the in-laws.

A recipe is useful when we want to explore a cuisine that’s foreign to us. You’d better believe when I cook a Thai dish, I want some guidance from someone who’s been there.

A recipe is useful to introduce us to new and creative flavor combinations.

A recipe is useful—make that nearly essential—for a home cook baking a Sicilian cassata or any other elaborate pastry.

A recipe is useful to “visit” other cooks to see how they do things.

But is a recipe really necessary to cook?

While I make part of my living by creating, writing, testing, and editing recipes, I’m going to bite the hand that feeds me by saying, “no.”

The earliest European written recipe cook book is thought to have been created in Latin in  the 1st century. De re coquinaria is credited to the Roman gourmet Marcus Gavius Apicius. Yet modern human beings had been eating for at least 50,000 years before those recipes were written.

They explored their environment . . . sniffed, tasted, applied heat, threw in some flavorful plant cuttings. They experimented. They cultivated some seeds that reproduced staple grains. They shared their learnings with family and friends. They used their physical senses with an application of common sense.

That’s what I did the other night. My weekly batch of bread dough was doing its thing while I was putting in a full day on the computer. I hadn’t planned anything for dinner. So, I did what any self-respecting human would do. I foraged.

I had the makings of a crust on hand. Such a deal! I pinched off the amount that would have been one loaf of bread and patted it into a pizza pan. (A non baker could keep purchased yeast dough on hand in the freezer for such opportunities.) In the refrigerator, I found a zucchini, half a bell pepper, a few mushrooms, an opened container of Pomi tomato sauce, and a hunk of extra-sharp Provolone cheese. I always have onions in the pantry so I sliced the onion, zuke, mushrooms, and pepper, and sautéed them in extra-virgin olive oil until they were soft and golden. I painted the crust with the Pomi, scattered on the veggies, and went crazy with the Provolone. Into a 425 degree oven for about 12 minutes and I had a triumph of woman over recipe: la pizza improvvisata. 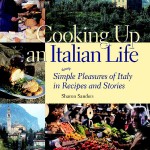 Full disclosure: I love cookbooks. I’m a cookbook author.  I own hundreds of cookbooks. There are so many joys to be had from beautiful food books—getting dinner on the table is only one of them. But, if you are starting out in the kitchen and have no skill set to rely upon (perhaps you were raised by wolves?), I recommend cookbooks that are more than a collection of recipes, such as How to Cook Everything (Tenth Anniversary Edition) by Mark Bittman, , The New Making of a Cook by Madeleine Kamman, Ratio: The Simple Codes Behind the Craft of Everyday Cooking by Michael Ruhlman.