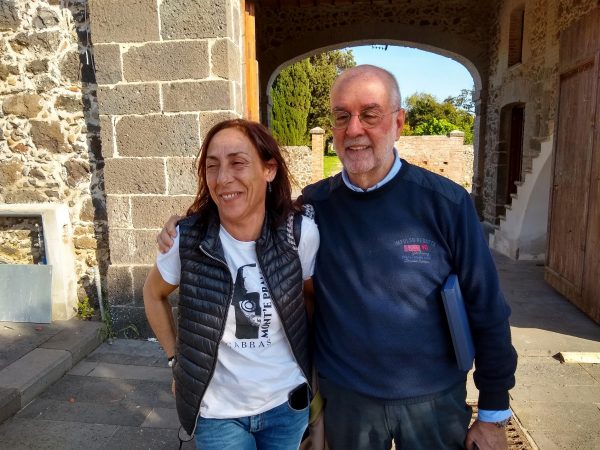 In 2018, when Sharon was studying Italian in Bergamo, and I caught up with her in Cremona, we met up with old pals James Martin and Martha Bakerjian.

These renowned Italy bloggers split their time between northern California and a small town in the wild and wooly Lunigiana section of Tuscany near Massa Carrarra. 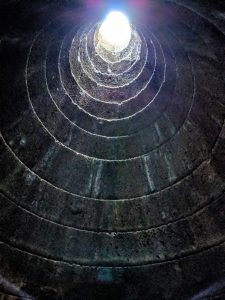 The pair met in the mid-1980s when they both worked on an archeological dig in Sardinia. They share an avid interest in Italy and blog at Martha’s Italy, Wandering Sardinia, and Wandering Italy

Over lunch we decided to meet again in 2019 to explore Sardinia together. In April, 2019 we boarded a Corsica Ferries boat in Livorno for an overnight crossing to Porto Aranci in Sardinia.

From there, we drove to Milis in the west central part of the island near Oristano.

The Tastiest Oranges in Italy

Milis is rich in oranges and generous people.

The main road into town is promising: elegant and flanked by chestnut trees along broad sidewalks. There is an old church on the right, a former equestrian training center fenced and locked on the left. 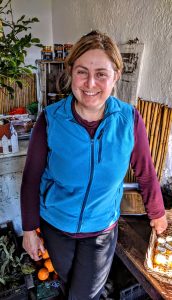 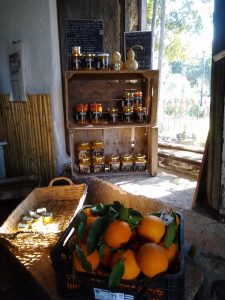 At the end of the boulevard is a Romanesque arch, behind which lies the fourth-generation-owned Sebastiano Pinna orange grove and gift shop. A wooden wheelbarrow heaped with oranges invites people to stop and step through the arch.

In the centro, a 1970-ish central piazza hints that he old town is aspiring to be modern, but the square doesn’t harmonize with the rest of the village.

Milis is quiet. A couple of bars, no restaurants, two butchers, bakeries, pasta shops, vegetable merchants, a small Conad (less than a super market) and another small grocery. There’s the Palazzo Boyl on the main square with signage suggesting a museum, but it is never open.

Yes, they have oranges, juicy, delicious oranges, perhaps “Italy’s Orange Capitol!!!!” Emilio, one of the orange vendors just outside the town, asks us with a grin whether we want male or female oranges.

Milis is near some key historic archeological sites…notably the Romanesque Santa Christina Church and a much earlier Bronze age sacred well and a cluster of nuraghi.

But Milis? Why had Martha chosen this quiet place as our introduction to Sardinia?

The Best Guide in Sardinia

We found out later on our last full day in town when Paola Loi, an energetic and knowledgeable Sardinian tour guide, Sardinia-Tours, burst into Milis. She was invited by Martha and James (“Paola is the best guide in Sardinia,” they told us) and drove up from the capital city of Cagliari with her friend Eugenio who owned the car.

Paola is a life force. Like me, she enjoys — really enjoys — engaging with people. We shopped for lunch goodies, then enjoyed a pranzo in our courtyard. After lunch, I stayed behind to load the dishwasher while the rest of the group went for a walk around town.

Within minutes I received a text from Sharon saying I should come to the Palazzo Boyl, the imposing villa that dominates the central piazza. Martha and James say it’s rumored the Nobel-prize winning Sardinian author Grazia Deledda spent summers at Palazzo Boyl.

Paola had stopped a signore on the street and enquired if there was anyway our little group could enter the Palazzo Boyl.

In turns out that the signore, Sergio Vacca, was the mayor of Milis and hell, yes, he could get us into the Palazzo. He had the keys in his pocket and a couple of minutes to spare.

I caught up with the group at the Palazzo. Paola was grilling Sergio about the history of Milis, the modest collection of art in the building, and why Sergio’s offices in the Palazzo didn’t befit his grand stature as mayor. Like I said, Paola is a force.

Sergio’s couple of minutes to spare stretched to nearly two hours. He also had the keys to the Romanesque church of San Paolo and he gave us a grand tour there.

He then led us across the road to an impressive, but now unused, equestrian center where horses were once bred, and riders trained. By the way, you lodging investors out there, the site could be a great place for a hotel and a huge step first step to transform Milis into a destination town.

Visit Milis. It is a quiet gateway village to some of the finest archeological sites in Sardinia…notably the sacred well in Santa Christina.

And say ciao to Mayor Vacca.