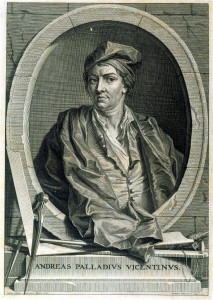 Portrait, believed to be of Palladio, by Sebastiano Ricci.

I visited my old friend, the architect Andrea Palladio, the other day at the Morgan Library & Museum in Manhattan. As always, he made the world seem harmonious, simple and elegant . . . a serene and sensible place.

Perhaps I should explain that Palladio isn’t actually in New York (he departed the earth in 1580). But fascinating pieces of his legacy are on display for old companions and new acquaintances to savor. A special exhibit Palladio and His Legacy: A Transatlantic Journey runs through August 1, 2010, at the Morgan.

The exhibit shows how a residential architect, working in the 16th Century Veneto, gained lasting international influence. Some early Palladio drawings, on loan from the Royal Institute of British Architects Trust, illustrate the intensive study that enabled him to become the bridge from ancient Rome to the future. 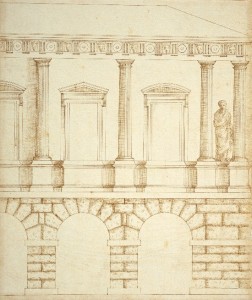 Detail of the design for Palazzo Civena, Vincenza, around 1539.

By poring over Vetruvius’ writings about classical architecture (no drawings survived with this text) and visiting ruins of the Empire, Palladio absorbed the ethos of those timeless structures and interpreted them in his magnificent designs. In 1570, he published I Quattro Libri dell’Architettura (Four Books on Architecture) which became the Bible of generations of European, British and American architects. 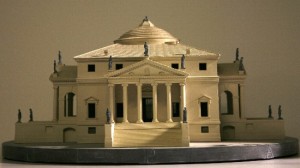 Also on view are sketches, pattern books and models of Palladio’s creations as well as several of the American buildings, such as Thomas Jefferson’s Monticello and the Virginia State Capitol Building, that he influenced.

If you can’t make a pilgrimage to the Villa Rotonda this summer, visit Palladio in New York. 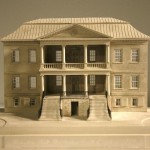 For all the details, go to