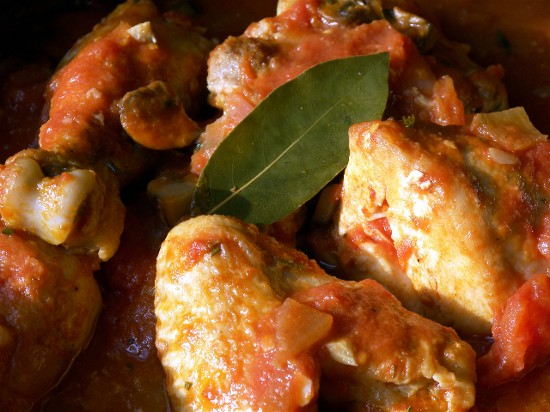 The search for a sensational pollo alla cacciatora is over.

The other day as I researched this recipe, I pondered on Facebook, “What makes a really good pollo alla cacciatora?

The suggestions were thoughtful.

“It should be cooked slowly so the flavors blend.”

“Eating it in Rome.”

“I put many different mushrooms in mine. To me that’s the best.”

My favorite came from Marge, who recommended “A really good-looking hunter in the kitchen.” Definitely the most enticing but, if acted upon, might have impeded my cooking progress.

Marge was right about one thing, though. “Alla cacciatora” translates as “like a hunter.” So I got to tracking a prototypical recipe in the classic 1,200 page Le Ricette Regionali Italiane and bagged three-from Emilia-Romagna, Umbria, and Sicilia (with the addendum con melanzane).

The Emilia-Romagna recipe goes like this. Chopped onion is fried in olive oil until “sarà ben colorita” it’s a good color. Out goes the onion to a platter and in goes lardo or pancetta to render for a few minutes after which chicken pieces come in to brown. After about 10 minutes, Marsala or sweet white wine bathes the bird and evaporates before tomatoes-in-sauce join the mix. Everything simmers, uncovered for about half an hour, then takes cover until the chicken is cooked through. If the sauce reduces too much, some hot broth is splashed in. Seasonings are simply salt and freshly ground pepper.

A few variations are given. In Parma, we’re told, they start with a battuto of onion, carrot, sage, and garlic. In some places, only olive oil or only butter is used. In Lombardy, dried or fresh mushrooms are popular.

The Umbrian version has more piquant flavors, seeming to me more southern than central Italian. It calls for un pollo novello, “a new chicken,” . . . my guess is that this is the equivalent of our old-fashioned term “spring chicken.” (Alas for chickens, Spring is now eternal!) Other ingredients are olive oil, tomato sauce, capers, salted anchovies, garlic, rosemary, lemon, salt and pepper.

So with all the facts in and weighed, I rendered a thoroughly partial decision. A really good pollo alla cacciatora is one that pleases my tastebuds. I splurged for an organic chicken and D.O.P canned tomatoes to which I added baby bella mushrooms (next time I may also add some reconstituted dried porcini), dry white wine from Orvieto, rosemary, garlic, and flat-leaf parsley. Next time I get a craving, I won’t have to go hunting for a good recipe.

Pat the chicken dry and salt on both sides. Dust lightly with flour shaking off excess.

Set a large sauté pan over medium-high heat until very hot. Add the oil and heat until it shimmers. Place the chicken in pan, skin side down. Cook for 10 minutes, turning as needed, until browned on all sides. Remove to a platter. Pour off most of the fat and discard.

Return the pan to medium-high heat. Add the onion. Stir. Cover and cook, stirring occasionally, for 2 minutes or until onion starts to wilt. Stir in the mushrooms, rosemary, garlic, and bay leaves. Cover and cook, stirring occasionally, for about 5 minutes, or until the mushrooms give off their liquid. Uncover and add the wine. Bring to a boil. Simmer for about 2 minutes or until the mixture no longer smells of alcohol. Add the tomatoes. Bring to a simmer. Season to taste with salt and pepper. Return the chicken to the pan. Spoon some of the sauce over the chicken.

Partially cover and reduce the heat so the mixture simmers. Cook for about 20 minutes or until the chicken is no longer pink on the bone. Remove and discard the bay leaves. If possible, allow the cacciatora to sit for an hour or so before gently reheating. It’ll taste even better.