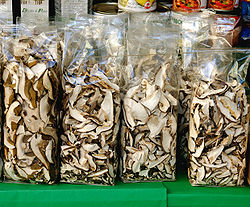 Dried porcini are easy to reconstitute and add intense mushroom flavor to many dishes.

My youthful encounters with wild mushrooms did little to prepare me for Italian porcini. The fungus of my childhood is the puffball (Calvatia gigantea). Every year at summer’s end, dozens of these absurd orbs ballooned in the grass of our front yard in central Pennsylvania. My dad picked piles of puffballs and proudly lugged them into the kitchen, where my mom sliced and seasoned them, dipped them in flour, and hauled out a cast-iron skillet to fry them in homemade lard. Thank goodness for the pork fat. If those puffballs had any flavor, they were keeping it to themselves.

Years later, I tasted fresh porcini (pronounced pohr-CHEE-nee) and my appreciation of wild mushrooms was drastically, permanently upgraded. It was autumn at a country restaurant in Tuscany. The cook cleaned one just-picked fungo porcino, removed its stem, drizzled the saucer-sized taupe cap with fruity extra-virgin olive oil, seasoned it with salt and the wild herb nepitella, and grilled it over a wood fire. He served the mushroom alone on a plate, which made it seem really special.

I bit into the juicy flesh. It tasted like meat from the earth—complex, rich, and woodsy. The body was substantial yet tender. Truly this was a mushroom so exciting, it deserved to be called wild.

I learned that porcini, which means “piggy,” probably is a reference to the stubby appearance of the mushrooms. Porcini belong to the genus Boletus, of which the most sought-after are the B. edulis, which grow under fir trees, and the B. aereus, found under oaks. The marvel of these fungi is the symbiotic relationships they have established with the trees. The tree and the mushrooms actually exchange nutrients that enable each to flourish.

Neither farmers nor scientists have yet discovered how to cultivate B. edulis. In an age when botanical engineers can splice a single gene from one plant into another, porcini remain one of nature’s closely held secrets.

A few years after my first porcini, I set out with Mario Gaggio, an accomplished fungaiolo, “mushroom hunter,” into the woods surrounding his home east of Florence. I felt privileged to be invited. Serious mushroom hunters guard their locations fiercely.

Mario apprenticed with an experienced fungaiolo and, ever since, has been refining his skills, which rest on an exquisite sensitivity to nature. Porcini thrive when hot dry weather in August is followed by autumn rains.

In September and October, Mario sets out before dawn almost daily to scout his prime locations. “He doesn’t remember faces,” says his wife, Anna, “but he remembers the trees.” Each day Mario studies the way the sun falls through the branches of firs, chestnuts, oaks, and pines. He says the ground must boil for a white mold called la muffa to form in these sunstruck patches.

If it does, and if all else goes well, within two weeks porcini magically appear. Then timing is crucial. The mushrooms must be gathered in their prime; if porcini grow even a bit too large, they will quickly rot.

For all his expertise, Mario is always at the mercy of nature. Some years, the porcini just don’t come. Or, capriciously, they won’t appear where they previously grew.

Lately, whenever I wince at the cost of a tiny cellophane packet of imported dried porcini, I find myself thinking of Mario patiently treading the Tuscan forest. There nature works her magic and resourceful humans reap the benefit in an eternal dance of delicate balance.

May the secret life of porcini remain shrouded under the trees, forever cloaked in mystery.

« In Italy, Wine Is Food
Say Ciao to Your Inner Italian »