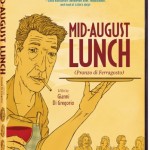 August is the worst time for foreigners to explore Italian cities because mostly they’ll encounter overheated, testy tourists like themselves. The living spirit of the cities has been drained out like the color from a faded photograph.

But what happens to those Italians left behind on Ferragosto? One such scenario is brilliantly portrayed in the 2008 film Pranzo di Ferragosto released in the U.S. as Mid-August Lunch.

Gianni di Gregorio, who co-wrote the script and directs, stars as the soulful Gianni who lives in the heart of Rome with his 93-year-old mother, exquisitely played by Valeria De Franciscis. The bags beneath Gianni’s eyes are silent odes to resignation.

But, don’t count him out. Gianni can simultaneously rock a cigarette, wine glass, and skillet with a flair akin to Rossini composing an aria. I dare you to watch this movie and not want to be included at Gianni’s table. 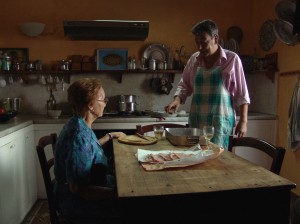