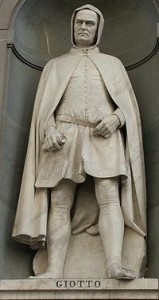 A statue of the artist and architect Giotto stands outside the Uffizzi Gallery in Florence.

Art restorers using ultra-violet rays are seeing rich original details of Giotto’s paintings in the Peruzzi Chapel in the Basilica di Santa Croce in Florence that have been hidden for centuries, according to an exclusive just-released story from Reuters news service.

The dry painted frescoes, said to have influenced Michelangelo, had been whitewashed and then badly repainted over the course of centuries.

Reporter Philip Pullella describes one panel of the Giotto viewed under ultra-violet light, “In the scene where God is accepting John the Evangelist into heaven, the wrinkles in John’s forehead, the threads of his beard, the whites of his eyes and God’s welcoming gaze appear like fleeting but powerful visions.”

Giotto di Bondone, known simply as Giotto, painted in the late 1200s and early 1300s throughout central Italy. His work was seminal in moving artists away from the stiff portrayls in Byzantine paintings to the more humanistic renderings of the Renaissance.