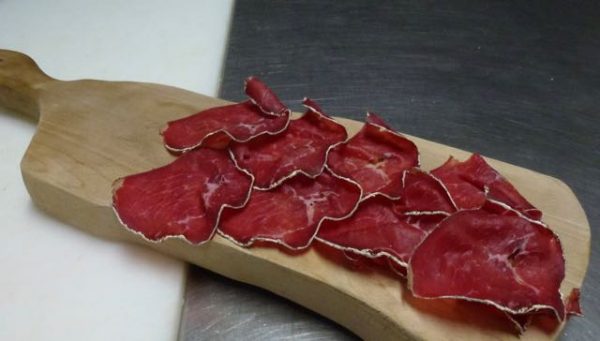 Bresaola is salted, air-dried beef, a technique that dates from medieval times.

CHIAVENNA–After an hour’s drive north of Dervio on the eastern shore of Lake Como, my Italian teacher Elena Arezio pulled her Volkswagen into a municipal parking lot in Chiavenna. This was north country–a mere 6 1/2 miles from Switzerland as the crow flies.

We had an appointment at Del Curto Macelleria, a century-plus-old family butcher shop that produces some of the finest bresaola in the province of Sondrio, Lombardy. Elena makes a pilgrimage to Del Curto every holiday season to buy the salted dried beef and other salumi. 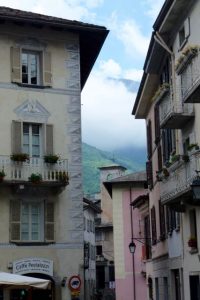 We found the shop locked since it was still officially the mid-day break. An older gentleman responded to our knock. He was co-proprietor Enrico Del Curto who went to fetch his brother Aldo, ostensibly the spokesman for the operation. At first, Aldo didn’t say much but he soon warmed to the topic of his life’s work as he led us downstairs to a series of spotless white curing rooms.

Tradition and Time to Create Bresaola 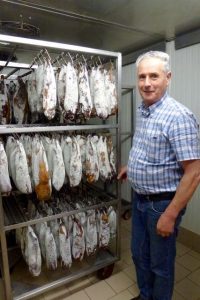 Bresaola enjoys IGP (protected geographical designation) status. Several cuts of beef from the leg and flank can be used. Aldo stresses that Del Curto uses only Italian beef while some other producers import beef from South American countries. Some cuts are bone-in; the boneless “nocino” commands a premium.

Del Curto starts the process by rubbing a mixture of salt, pepper, and garlic over the beef. The seasoned cuts are packed tightly in covered tubs for no more than 15 days. During this stage, the salt draws out liquid and seasons the meat.

After draining the liquid from the meat, a small amount of potassium nitrate is added to prevent botulism. “Pochissimo [a tiny amount],” says Aldo, who says that some of the meat is lightly smoked but most clients prefer the air dried.

Aldo opened the doors to temperature-and-humidity controlled rooms where hundreds of beef chunks were hanging. Some of the longer-hanging pieces were covered with muffa (a soft white naturally-occurring mold) that looked like snow.

I’m astounded that one butcher shop could produce such a volume of bresaola. Aldo responds proudly that the beef is served in fine restaurants in Paris, Rome, Milan and other cities.

At last, the tasting room. Aldo machine sliced the bresaola as thin as silk. I blinked at the ruby color, more vivid than fresh beef. The slice dissolved on my tongue. The bresaola was a revelation: tender, moist, complex, slightly saline but not salty.

Grazie, Aldo and Elena, for a unique slice of Italy. 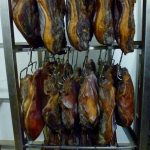 The Del Curto brothers also produce violino di capra, cured and air-dried goat shoulder. The whimsical name is a nod to the resemblance that the elongated shoulder shape has to the musical instrument. Here’s a look at Aldo slicing a Stradivarius of cured meat at the 2016 Slow Food Salone del Gusto. Sadly, I didn’t taste the goat prosciutto. Del Curto only sells the whole violin, not slices.

How Goat Prosciutto is made.