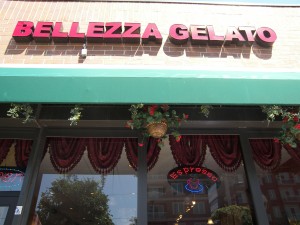 News of great gelato spreads faster than a melting cone.

I heeded the journalistic “rule of three.” My instincts said, “If you’ve heard about Chicago’s Bellezza Gelato Caffe from three sources, you should check it out.”

• As I devoured a recent Wall Street Journal article on the finest gelati in Sicily, I noticed a “Local Scoops” sidebar that cited Bellezza Gelato Caffe  as one of the four best in the U.S.

• A few days later, on my Facebook news feed, my Chi-town buddy Bill “fun is my middle name” Linden announced he was taking his nieces and nephews to Bellezza.

• My husband’s baby brother Michael, no slouch on the insider foodie circuit, mentioned that Bellezza was the real deal.

Fate played a winning hand in my research because a visit to Windy City relatives was already on the calendar.

Walter, Tess, and I snuck out on a searing Friday afternoon to Harlem Avenue on the city’s far west side. Bellezza, tucked into a tiny shopping strip, looked modest as we pulled into the parking lot.

Once inside,  the voices of Italian crooners filled the air as we were drawn like magnets to the sleek display cases. 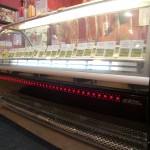 Italian-style case--sleek as a Ferrari. 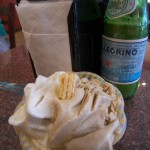 One silken spoonful is all it takes to feel as if you're in Florence, Rome, or Palermo.

We were greeted by Maria Di Nunzio and Tim Ashorian, corporate dropouts turned gelateria proprietors. They glow with the joy of sharing one of life’s simple pleasures.

They explained that their gelato is prepared from all natural ingredients with no artificial colors, emulsifiers, or additives. The pistachio, for instance is pale compared to the typical dyed neon green version, but the flavor is pistachioissimo.

Gelato tastes so vibrant for several reasons. The fat content is lower than ice cream. Because fat coats the palate and dulls the perception of flavor, gelato tastes more intense. It also has less air whipped into it (the technical term is “over run”) and is stored and eaten at a slightly warmer temperature which also lets the flavors pop.

“Would you like to sample any flavors?” Maria asked. Si, si, si. Lemon sorbetto, classic cannoli, Capri coconut . . . all delightful.

The adorable Tess ordered a combo shake of flavors Dutch Chocolate Delight and Strawberry. Walter asked for a bowl with half vanilla and half coffee. As a coffee fiend, I had no choice but to select the Affogato, touted on a countertop chalkboard. 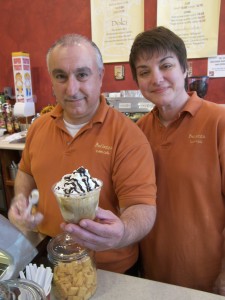 Affogato means “drowned” in Italian and in this specialty, a scoop of gelato (I chose vanilla) sits on a squirt of syrup (I chose caramel) and then gets “drowned” with a shot of freshly-brewed espresso followed by whipped cream and some chocolate shavings.

Maria told us that she and Tim researched specialty gelato dishes and Affogato appealed to them. Their clients have agreed. She believes it’s from Tuscany. I couldn’t find any background information on gelato l’affogato al caffè in any of my Italian culinary reference books, yet a search on Google.it produced 110,000 hits. I’m thinking the Affogato may be a recent–and brilliant–invention.

This recipe on the illy site is classic and would be easy to do at home (although I cannot guarantee it will be as divine as Bellezza’s). It calls for 2 small scoops of vanilla gelato (chocolate or fiordilatte are mentioned as acceptable alternates) drowned with an espresso lungo (brewed with slightly more water than a regular espresso) topped with whipped cream and chocolate shavings.

If you should find yourself in Chicago, or more likely stuck at O’Hare Airport which is a mere 8-mile taxi ride from Bellezza Gelato Café, please have an Affogato for me.

Is Affogato a gelato dish or a drink. . .or both?

Do you know where it originated?