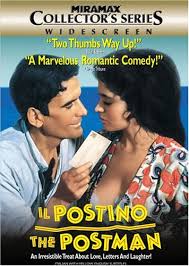 Have you ever been convinced that you’ve seen a movie only to find out that you hadn’t?

That happened to me with the Academy Award-winning Il Postino. Recently watching the DVD from Netflix, I realized to my chagrin that I had probably seen the trailer but not the entire film. For years, I’ve catalogued it in my mind as a standard Italian sex romp (doubtless because of the voluptuous actress on the poster) but that’s not what it is.

The film was made in 1994 and released in the U.S. the following year. Directed by Brit Michael Radford, it is the story of Mario Ruoppolo, the postman who delivers letters to Nobel Prize-winning Chilean poet Pablo Neruda who is exiled on an Aeolian island. The sweet story portrays poetry blossoming inside the soul of the simple postman. With Neruda’s inspiration, he wins his Beatrice.

Reading reviews and features about the film, I learned that Massimo Troisi, the Neapolitan comic actor and director who played the postman died only 12 hours after filming was completed.

Troisi was plagued by heart problems since childhood and doctors warned him when filming began that he needed a heart transplant. He chose to go ahead with the work. He had become captivated with the novel Burning Patience by Antonio Skarmeta on which the screenplay is based.

Maria Laurino reported in The New York Times, “Il Postino was the 12th film for Troisi, who also directed five of the movies he starred in, and his death shook Italy. His devoted public, who had no idea that he was seriously ill, showed up by the thousands at his funeral in San Giorgio a Cremano, the small town outside Naples where he was born.

“Troisi had this ability to express the theatrical form of living that Neapolitans have in general and then translate it to the theater,” said Giuliana Bruno, a professor at Harvard University and author of Street Walking on a Ruined Map, a study of Neapolitan film. “It’s not just acting out language, but using facial expressions and body language. The soul of the people comes out in his work.”