Auguri to Mary Ann Holm, who won the random drawing for a digital copy of SimpleItaly Loves Chicken.

Grazie to all who commented on the post to enter the sweepstakes. To thank you, here’s a recipe from the e-book. 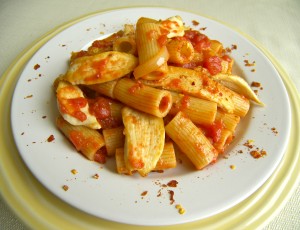 Set a covered large pot of water over high heat.

Scrape the pancetta and onion to one side. Add the chicken in a single layer. Cook, stirring occasionally, for about 4 minutes, or until no longer pink.

Add the tomatoes, pepper, and 1/4 teaspoon salt. Reduce the heat to medium-low. Cook, stirring occasionally, for 20 minutes. Season to taste with salt and more pepper if needed.

When the water boils, add 1 tablespoon salt and the rigatoni. Stir. Cover and return to the boil. Uncover and cook, stirring occasionally, for about 10 minutes, or until al dente. Reserve 1/2 cup of the cooking water. Drain the rigatoni.

Add the rigatoni to the skillet. Toss to coat. Add a bit of cooking water, if needed, to

loosen the sauce. Garnish with cheese and more crushed red pepper at the table.