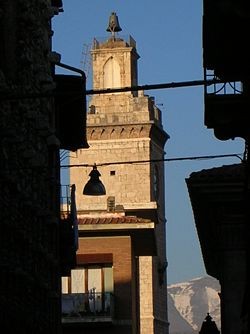 Our plan to begin posting stories of our recent Puglian adventure is delayed by the horrible news of the earthquake in L’Aquila, Italy, that occurred during the pre-dawn hours on Monday, April 6.

This one strikes home to us because we drove past L’Aquila, the capital city of the region of Abruzzo, on March 24 while on our way to the Gran Sasso in the Apennines. We then continued south to the town of Sulmona for the evening.

The territory near L’Aquila is stunning. Snowcapped mountains soar more than 2,900 meters into the sky and I, for one, had a sense of solidity from all that formidable rock. But the region is prone to earthquakes and this terremoto registered a reported 6.3 on the Richter scale. Sadly, there are many fatalities, including children, although accurate numbers are still sketchy.

The American Red Cross Web site states that they have not yet been called upon in the relief effort. The New York Times is reporting that the Italian-American Museum in Manhattan is collecting donations for earthquake relief in L’Aquila.