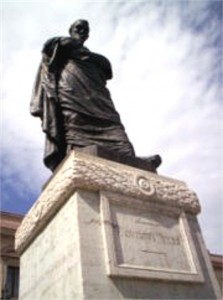 The great Roman poet Ovid was born in 43 B.C. in the outskirts of Sulmona and the town proudly claims him as its native son. A bronze statue of him commands the Piazza XX Septembre.

Ovid likely wrote his poems about love and life on wax tablets or rolls of papyrus.

These days, it’s microprocessors and LCD screens that facilitate communication in Sulmona and beyond. Through this miraculous technology, we “visited” the Albergo Stella on venere.com, just one of many accommodations middlemen. Turns out we paid $97.82 for a small but spotless room with bath, free parking, and continental breakfast in the morning. 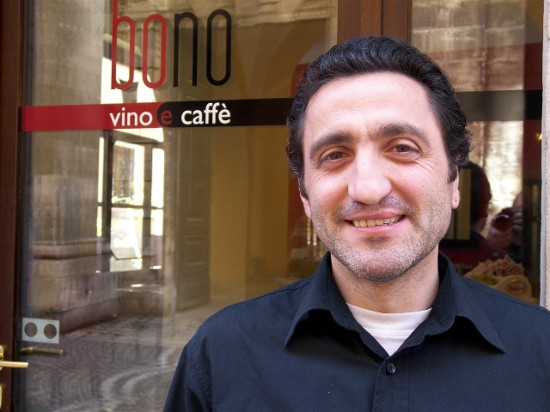 Albergo Stella is owned by the Bono brothers, Roberto and Giuseppe. Roberto operates the hotel and the Caffé Bono. Giuseppe, the wine guy, maintains the impressive enoteca adjacent to the Caffé. These enthusiastic entrepreneurs even have plans to open another Caffé on the other side of town despite the current economic downturn which has increased unemployment in town.

Roberto noticed that we booked our room online and volunteered that, next time, we should make the reservation directly. “I’ll give you a great room rate and save the 15 percent commission I pay the booking service.”

He also asked if we were set with lodging reservations for the rest of our trip. We explained that we were going to wing it and re-create the good old days when we first met and fell in love in Florence and traveled all over Europe by the seat of our pants.

“Just in case,” he said, “remember www.booking.com. It has a great selection of European hotels and B & B establishments.”

We thanked Roberto but secretly thought to ourselves, “We don’t need that. Now that we’re back in Italy, our old radar will kick in.” Less than 48 hours later, we were humbled into logging onto booking.com. The night after we left the Stella, we had to settle for a Best Western in the seaside resort of Barletta. Arriving as sun set, and dealing with traffic from hell, our dreams of winging it took flight for the night.