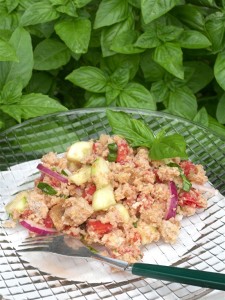 I crave panzanella in August. This home-spun jumble of stale bread, succulent tomatoes, aromatic basil, olive oil, wine vinegar, cucumber and onion is restorative. Each refreshing bite perks me up, makes me feel more  like a budding flower and less like a scorched weed.

I first tasted panzanella in the countryside outside of Florence. Friends told me that the dish evolved as thrifty country cooks combined stale bread with juicy seasonal produce to create a quick, inexpensive salad.

These days, the challenge to putting together a good panzanella is in obtaining ingredients that will give the dish a genuine flavor and the proper texture. The keys are the bread, the tomatoes, and the olive oil.

Panzanella requires a rustic whole-grain loaf–with no fat or sweeteners–that won’t dissolve into goo when moistened. (LaBrea Bakery whole grain loaf is one commercially-produced example. To find a store near you, go to La Brea Bakery.) Many so-called Italian breads are made from white flour and dough enhancers and are just too fluffy to hold their crumb. If you’re a baker, you can prepare the Italian Wheat Berry Bread for the panzanella. If you think your bread won’t hold up to the water bath, I recommend skipping that process. Instead, simple toast the bread lightly and then cut it into cubes before tossing with the vegetables and dressing. 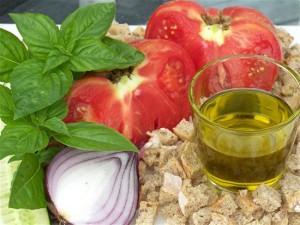 Choose very ripe fruit that’s grown in your area. I like heirloom varieties which are like tomato-juice machines. 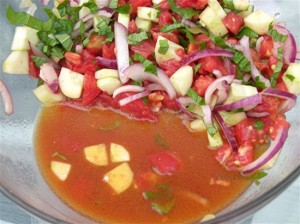 Olive oil
The fruity taste of extra-virgin oil is essential. When it’s mixed with the vegetables and basil, it produces a seasonal elixir.

While I prefer the classic simplicity of the following recipe, you can add protein or other vegetables to a panzanella to make it a one-dish meal. Add-ins include lettuce, radishes, celery, fennel, prosciutto, canned tuna, Parmigiano Reggiano, Gruyère, capers, artichoke hearts, hard-cooked eggs and roasted red peppers.

Place the bread in a large bowl. Cover with cold water. Allow to soak for 30 to 60 seconds until bread is saturated. Test by squashing a piece between thumb and finger. Drain. Scoop the bread in cupped handfuls, squeezing out excess water but taking care not to pulverize the bread. Transfer to a platter. Continue until all the bread is squeezed.

In a large bowl, whisk the oil, vinegar, and 1/4 teaspoon salt. Add the tomatoes, cucumber, onion, and basil. Toss. Add the bread and toss. Season to taste with pepper and more salt, if needed.

What’s your go-to Italian summer dish? Tell us about it.