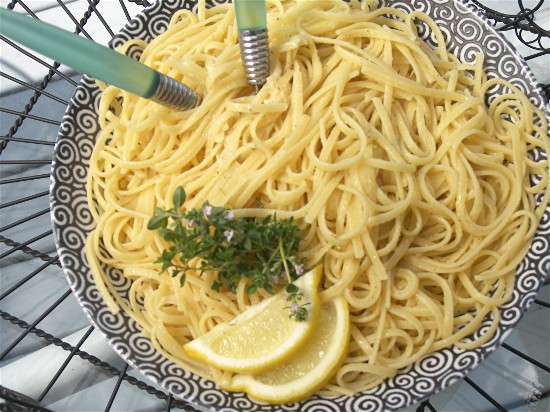 She had me at “limone.” That’s because lemon is perhaps the best flavor on the planet.

When Sara posted a comment longing for a recipe for chitarra al limone she ate in Sulmona, she set me on a delectable sleuthing mission.

Sulmona’s where I had maybe the best pasta dish of my life…but I can’t remember the name of the restaurant. The dish was chitarra al limone, unlike any I’ve had before or since. I’ve tried several recipes, but nothing comes close. When I asked the owner for her secret, she said “limone!” I said, I know…and what else? She smiled and said, “solo limone, signora.”

She’s going to her grave with the secret. I thought it might be that they used that panna that comes in little tiny cartons and doesn’t need refrigeration, but I tried it and that wasn’t it. The secret’s still in Sulmona…

When I asked Sara for more description, she offered this:

It was very very light and I don’t remember that it was creamy, buttery or eggy. It was as if essence of lemon and very little else coated each strand… I’ve tried just olive oil and lemon with a touch of cream but that just wasn’t the same.

Armed with these clues, I speculated that the dish had to contain cheese, probably Parmigiano-Reggiano, to counter the tartness of the lemon and help create the luxurious mouth feel that she described.  I’m thinking that Sara’s signora wasn’t being coy when she said “solo limone.” To her, cheese is probably just a “given” not worth mentioning.

I consulted the usual reference suspects: Ada Boni’s Italian Regional Cooking, Le Ricette Regionali Italiane (Solares), Artusi’s The Art of Eating Well, The Ultimate Italian Cookbook by Carla Capalbo and Marcella’s Italian Kitchen. None offers a recipe for chitarra al limone. Giuliano Bugialli’s Bugialli on Pasta has a Spaghetti al Limone recipe “from all over Italy” containing quite a bit of butter and cream, more of a lemon- flavored cream sauce than the intense lemon sauce desired by Sara. Michele Scicolone has a Linguine with Lemon recipe in 1,000 Italian Recipes but it’s made with butter. For an Abruzzese dish, I felt that olive oil would be more traditional.