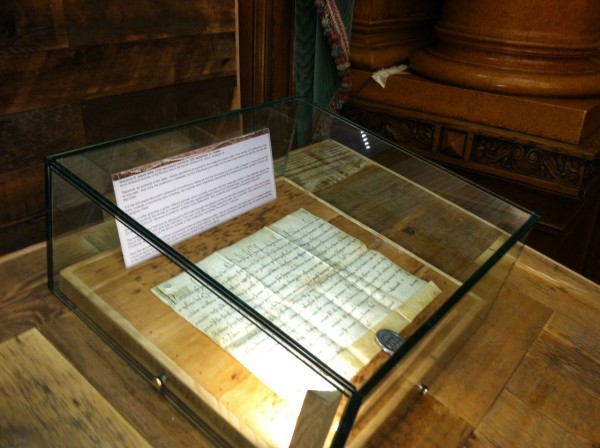 The Codex 338, dated between 1224 and 1226 (the oldest existing copy) contains the writings of Francis and among these the “Canticle of the Creatures,” a work considered the first literary document written in the vernacular and a poetic and spiritual masterpiece.

This time of year, the Brooklyn Borough Hall is ablaze in all its holiday glory. But its current display, in particular, more clearly conveys the spirit of Christmas than any number of colored lights.

From now until Jan. 14, 2015, Brooklynites and visitors can see–for the first time in this country–papers that belonged to St. Francis of Assisi. The exhibit, Frate Francesco: Icons, Words, and Images, features documents from the early thirteenth century that capture the spirit of this extraordinary individual.

The show, which originally appeared in Rome, was displayed at the United Nations prior to coming to Brooklyn. These documents have only been viewed in Italy before this year.

The exhibition is divided into three sections: 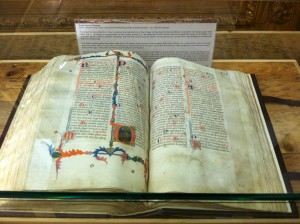 One of the most moving documents from the show is the illuminated Bible, which depicts St. Francis’ union with God. The illustration of the saint remains vibrant for all viewers who want a reminder of all the good that can be done in this world.

St. Francis’ virtues of compassion and connection are more important than ever nearly one thousand years after he lived. Francis sacrificed his life and wealth in service of the poor, and his commitment to his fellow man transcends all religions.

At the recent opening reception, his spirit was in the air.