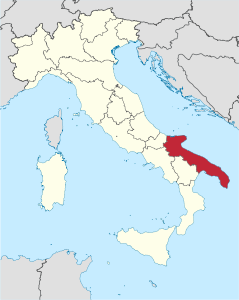 Wild and beautiful coasts are always close in the region of Puglia.

Eonline quoted a statement from the newlyweds issued by People magazine which apparently has a lock on the coverage. People’s print edition will publish exclusive photos this week.

All of this gushing coverage has highlighted geographical challenges among some in the U.S. media. The most humorous gaffe I read is in the Los Angles Times web column Ministry of Gossip. They reported that the couple’s famous friends “have landed in the southern town of Puglia.”

Since Puglia is a region, roughly equivalent to a U.S. state, that would be like saying they landed “in the southern town of Florida.” 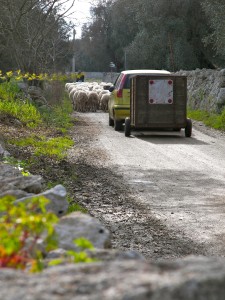 Traffic on a country road in Puglia.

Puglia, in fact, resembles Florida in that it’s a peninsula jutting out from the mainland mass of Italy. It’s the heel of the boot. Walter and I traveled by car through the region three years ago. We marveled at the oceans of olive tree groves, the many wine vineyards, the conical stone trulli, the stunning wild beauty of the coasts (on three sides), Spanish baroque architecture in Lecce, the purity of the cucina and the genuine hospitality of the locals.

I asked our friend Cinzia Rascasso, who operates the Stile Mediterraneo Cooking and Wine School with her sister Marika, if she believes the international publicity from the wedding will boost tourism to her native region. “I am not sure this will impact tourism in Puglia,” she said. “Puglia has already become a very popular tourist destination . . . very different than when you came.” 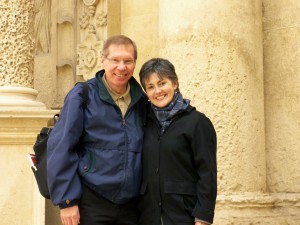 The happy couple Walter and Sharon (sorry, Justin and Jessica) in the Spanish baroque city of Lecce in Puglia.

If I had access to Justin and Jessica, I’d compliment them on their choice of locale for the nuptials and asked them how they chose it? Had they visited there previously? Walter thinks that avid golfer Justin may have been drawn to the links at Egnazia. Good selection, I’d say. And if brings more people to know and appreciate this distinctive ancient place, that’s worth celebrating.

Have you visited Puglia?