This much is true. I was on Lake Como last week participating in a fabulous fam trip sponsored Central Holidays.

However, I will neither confirm nor deny rumors that I had anything to do with Oscar-winner George Clooney’s breakup with the Sardinian velina Elisabetta Canalis. 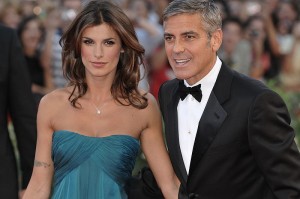 As for the insinuations that I was stalking George? Laughable. I never got any closer to his villa than the distance from the sight-seeing boat.

All I know about the situation is what I read in the media.

As I sipped my secondo cappuccino on the morning of Tuesday, June 21, I read in La Provincia that George and Ely had been spotted sharing a romantic dinner on the lake. The article featured a photo capture from The Globe Web site. “La Favola Continua” . . . “the fairytale continues” proclaimed the headline. 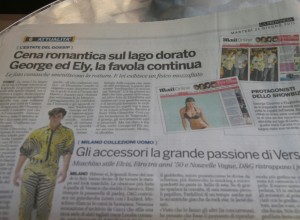 So, I was as shocked as everyone with the announcement a day later:

“We are not together anymore,” People.com quoted the celebrities as saying in a joint statement.

“It’s very difficult and very personal, and we hope everyone can respect our privacy.”

No reason was given for the split.

While us glamor-starved gawkers fret over George’s romantic relationships, the folks on Lake Como care only about his residential entanglements. His purchase of a villa on Lake Como has been very, very, very good for local tourism– “The Clooney Effect,” as Leoni Luca, Vice Sindaco for the commune di Bellagio put it.

Frankly, I think George might want to spend a little bit less time dating and focus on keeping up the property. The roof really looks as if  it needs some work. 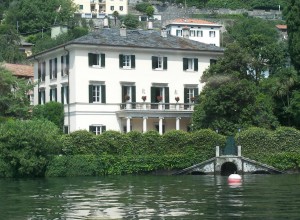