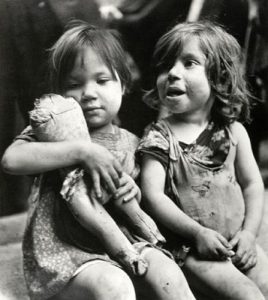 Journalist David Chim Seymour captured this poignant image of two young girls who could be Elena and Lina in Naples 1948.

As fate would have it, I finished The Story of the Lost Child on a recent stay in Naples.

The last pages resonated with me as I don’t believe they could have anywhere else.

The Story of the Lost Child, is the final book in the Neapolitan quartet by Elena Ferrante. The protagonists are Elena Greco (also called Lenuccia or Lenù) and Raffaella Cerullo (also called Lina or Lila).Elena and Lila were born into a shattered world in August 1944–in a dismal neighborhood in a neglected city that had endured massive bombing during World War II. 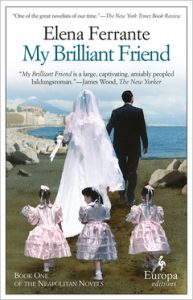 The Story of a New Name

Those Who Leave and Those Who Stay

The Story of the Lost Child

Fans are anticipating the November 2016 release of Frantumaglia: A Writer’s Journey, a nonfiction collection of the author’s writings, to glean insights into the life and work of the fiercely anonymous novelist. 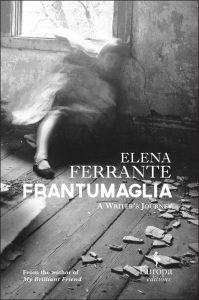 Ferrante elaborated on the word frantumaglia in a May 2016 interview with Nicola Lagioia published in The New Yorker:

“We are, as you say, interconnected. And we should teach ourselves to look deeply at this interconnection—I call it a tangle, or, rather, frantumaglia—to give ourselves adequate tools to describe it. In the most absolute tranquility or in the midst of tumultuous events, in safety or danger, in innocence or corruption, we are a crowd of others. And this crowd is certainly a blessing for literature.”

She mentioned the word also in a Paris Review interview conducted by Europa publishers. “My mother liked to use the word frantumaglia—bits and pieces of uncertain origin which rattle around in your head, not always comfortably.”

While Ferrante would no doubt disapprove, journalists and travel writers are descending upon Naples sleuthing for locations to pin to the narrative. Here are a few interesting reads: The New York Times, NPR, The Irish Times. 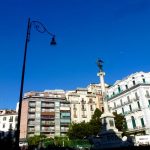 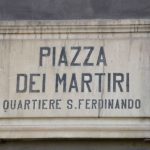 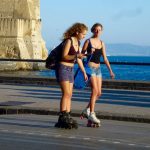 I myself followed Ferrante’s footsteps to Piazza dei Martiri in the chic Chiaia shopping district. In the books, this piazza represents a place of aspiration, but never quite assimilation, for some of the characters.

Along the lungomare on a Sunday twilight, I spotted two teens who could be Elena and Lina in 2016. I wondered how different, or maybe in some ways similar, their lives are compared to the Neapolitan novels.

Have you read the Neapolitan novels? Share your thoughts with us.