Yesterday I listened to an NPR report about the state of the family meal in America.

This was the scene of one family that was interviewed. At 6:02 p.m., three children sat down to supper. The mother and father did not eat with the children (they planned to eat later). The father wasn’t at the table. He was checking his phone. Grandpa was nearby looking at his iPad. The TV was blaring in the background. The meal lasted for eight minutes. 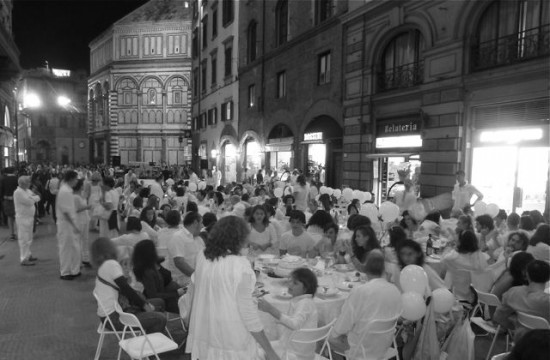 In Florence, as everywhere in Italy, dining is a celebration of life.

A few years ago on a research trip to Rome, I connected with Giuliana, the former neighbor of an American friend who had lived in Rome for a while. We agreed to meet one spring evening at the Spanish Steps.

I assumed the girl would suggest we eat at a local trattoria but instead she said, matter-of-factly, “Come to my apartment and I’ll cook dinner.” I tried not to appear startled as I smiled and accepted. Inwardly, I couldn’t imagine a meeting with a 19-year-old stranger in L.A. or Sydney or London playing itself out in the same way. We hopped on the Metro, disembarked at her San Giovanni neighborhood, and walked the couple blocks to the place she shared with two other girls.

We entered the apartment’s dim hallway from which several bedrooms branched. Typical of these old apartment buildings, most of the open space was vertical. Giuliana ushered me into a kitchen that was about the size of my laundry room back home. Refusing my offer to help, she seated me at the small table by the window overlooking the courtyard. From my seat, I could have reached the stovetop burners without straining.

Giuliana proved to be lively and talkative. As she leisurely peeled potatoes, grated cheese, and cooked spinach, she told me about her family back home in Ragusa, in southern Sicily, much closer to Tunisia than to Tuscany. She seemed a little homesick. We discussed her studies, her favorite American TV shows, and her desire to visit the United States. When all was ready, we dined on spinach-cheese torta, crispy oven roasted potatoes with rosemary, and a greens salad.

Giuliana’s food was good, but I was far more impressed with her poise as a hostess. For a teenager to so effortlessly share her table—and by extension, herself—seemed nothing short of remarkable. For hospitality to be this natural, this unforced, it had to have been a part of her life since birth.

I know for a fact that not all Italians are wonderful cooks (I have a few friends who ably prove that point), but I am nearly certain that all Italians know how to dine.

To Eat, Perhaps to Dine

Just what is the difference between eating and dining? Well, what is the disparity between having sex and making love? The former are instinctive acts that satisfy primal animalistic needs. The latter are evolved forms of human interchange—the conscious actions that separate us from the beasts. With dining, as with amore, as much attention is paid to the details—the setting, the participants’ desires, the experience—as to the act itself. 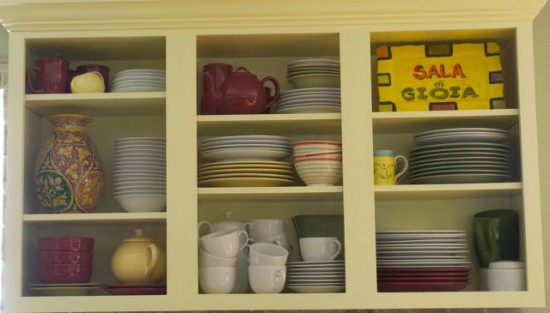 “Food in an older culture like Italy is part of personal identity. It is one of the links to your place on this earth and how that place is your circle of trust. Food is homeland literally and figuratively,” says Lynne Rossetto Kasper, host of American Public Media’s national radio show, “The Splendid Table.” “Eating together is the ultimate sign of civilization—facing each other, making what the hands of the family have created part of your body. Now that is true communion.”

“Until recently, family gathering at the table was a given. Heaven help the soccer coach who scheduled a practice at dinnertime. No one would come, and parents would be outraged. This is changing for so many complex reasons. We cling to the romantic notion that every day all of Italy dines together at their family tables. Many still do, but many more are part of change and evolution. Nothing stays the same. Yet the idea is treasured and exalted in Italy, more so than elsewhere. As long as that attitude exists, communion will continue.”

Just as a play requires a stage, dining needs a table. While you can eat at the sink, in bed, on the couch, in the car, on the bus, in line at the supermarket, at the movies, in a stadium, you cannot dine in any of those spots. You can dine only at a table.

“There are only two foods Italians will eat on the street. One is an ice cream cone, the other, maybe, is pizza. Otherwise, it’s not appropriate,” says Benjamin H. Senauer, Ph.D., professor of applied economics at the University of Minnesota Twin Cities. On frequent research visits to Italy, Senauer finds plenty of tasty fare for thought in his area of expertise—food consumption behavior.

Italian culture is more than 2,000 years old and Italians have a great respect for their culture, Senauer says. In Italy, dining behavior comes down to how they treat time. Time passed at the table is valued. “Italians, across all economic and societal levels, know food quality,” observes Senauer. “They have a highly tuned sense of taste.”

Those Italian parents who don’t approve of extracurricular activities during l’ora di cena, the dinner hour, aren’t ogres. They’re not trying to deprive their offsprings’ self-expression. They simply have priorities in perspective, possibly the legacy of a culture that has thousands of years of experience to inform it.

Young Paolo or Paola likely won’t grow up to play calcio in the World Cup or sing Puccini at La Scala, but these ragazzi will become adults, possibly parents, who will partake of the respites of the table every day of their lives. Dining is an everyday escape from the ordinary. A daily vacation. A recurring respite. A release from the have-to’s, gotta-do’s, and don’t-want-to- do’s.

« The Most Beautiful Italian Love Song?
Francis and Francis »