We left Fiumicino, not in “my” noble Alfa 147 but in an ordinary Lancia Ypsilon (damn it), heading due east on A24 for Abruzzo and our first night’s destination in Sulmona. 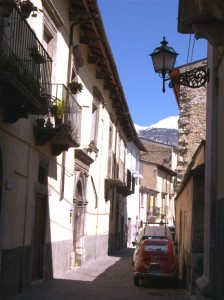 View of the Apennine peaks from the Abruzzese town of Sulmona.

As Sharon caught some shut eye, I missed the exit for A25 because I was paying more attention to the soaring, snow-covered peaks of the Gran Sasso than to the signage. I zipped past L’Aquila (the ancient city that was damaged by an earthquake three weeks later) and was on my merry way to Pescara on the Adriatic when Sharon awoke.

She spotted the mountains and then turned her attention to the map. Oops, I had overshot the exit by some 50 kilometers. My mistake. It didn’t help my case that Sharon and I always debate whether to rest near the airport upon arrival or get on the road immediately.

It was time for another cappuccino.

Exiting the highway, the Alpine architecture made it seem as if we had driven all the way to the Tyrol instead of central Italy. This was ski country. In fact, we learned that Abruzzo boasts the most national parks of any region in Italy. Some guest house/restaurants had already closed for the season but we spotted a charming tiny bar. Spring dandelions poked through the snow.

The gracious bar owner seemed glad to see some Americans. He told us that he had married a woman from Nebraska but that she had returned to the US to live in Colorado. A young ski-bum-who would have looked at home in Snowmass-ordered a cappuccino and sweetened it with local honey instead of sugar.

With the bar man’s directions, we headed on a back road short cut to Sulmona. In the town of Paganica, we decided to change some money before the bank closed for midday. Sharon disappeared through the “Star Trek” glass security tube. The time dragged on as my “on the road” adrenaline began to surge again.

Finally, nearly 25 minutes later she emerged with her Euro and a story about how new anti-terrorist measures had led to increased scrutiny on stranieri attempting to convert cash. She was passed up through layers of junior, middle and senior management before someone could authorize the modest transaction. I think they were just intrigued by Sharon because I  didn’t get that level of attention when I changed money later that week. 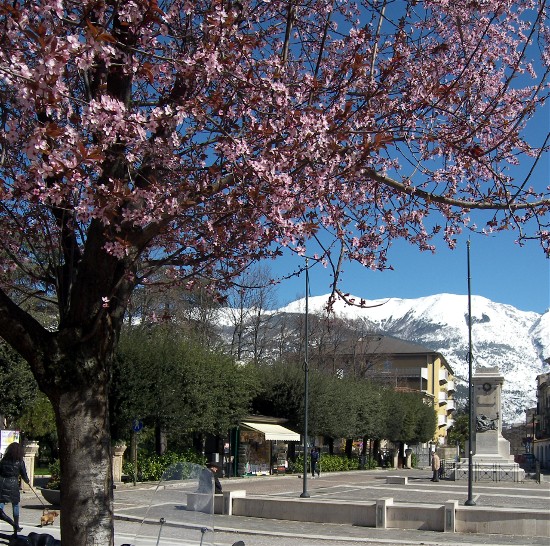 Euro in our pockets, twisty mountain roads behind us, we approached Sulmona. Activating our internal radar, we reached Viale Roosevelt which turns into Corso Ovidio through the Centro. Aha, Sharon spotted the sign for Albergo Stella just as we passed by the tiny street that housed it. After several circles around the general area of our hotel, we succeeded in pulling right up to the door. Proprietor Roberto Bono greeted us so warmly that our irritation melted as quickly as the snow at the base of the Gran Sasso.