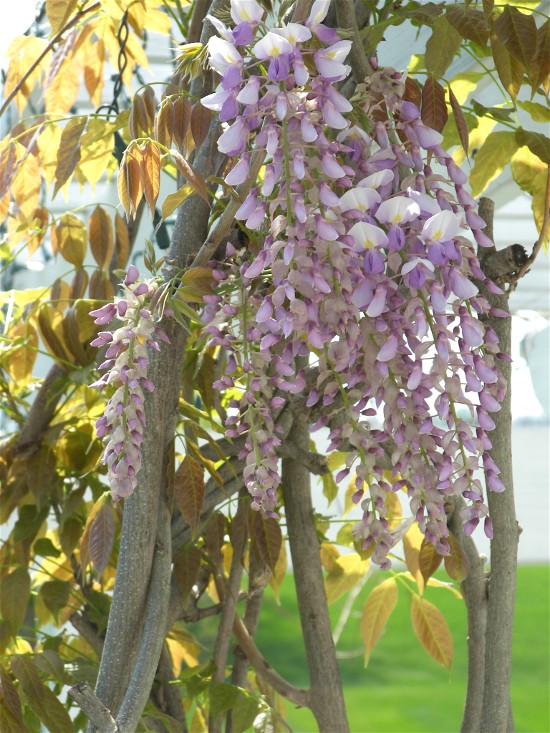 All my gardenista friends assured me that wisteria cannot, actually will not, die.

“Sharon,” they warned, “it will take over your pergola. . . your roof. . .then your entire house. Eventually you will be trapped in a maximum security wisteria prison.”

Boy, were they wrong! The newly constructed pergola behind our sub-division home was sitting on a slab of soil as hard as concrete. Several wisteria plantings succumbed. After I had the brilliant idea to construct planter boxes for new attempts, the voles moved in to pig-out on the all-you-can-eat roots buffet.

Now, 10 years later, I am triumphant. I have not one, but two, wisteria that bloom. How I appreciate them.

Every spring when I gaze at these impossibly gorgeous pendulous blooms, I’m reminded of the film Enchanted April. It starts as Lottie the frumpy post WW I English housewife reads a newspaper advert for vacations in Italy:  “To Those Who Appreciate Wisteria and Sunshine.”

This flick is quintessential posh Brit production.  Lush settings and costumes showcase a tale of British hot house flowers—Lottie and three new acquaintances who  share the villa rental—blossoming under the Mediterranean sun.

Italy works its fatal magic on the quartet, of course.  We’d expect nothing less for those who appreciate wisteria and sunshine. Directed by Mike Newell, this 1992 film features a stellar ensemble cast including Jim Broadbent, Miranda Richardson, Josie Lawrence, Polly Walker, Joan Plowright, Alfred Molina, and Michael Kitchen. Set in London and the Ligurian coast of Italy in 1922, this gentle comedy is love-and-life affirming.  Rent the film on Netflix or purchase a copy at amazon.

Reading that Italian director Giuseppe Tornatore’s new film Baaria opened this year’s Venice Film Festival — and wishing I were there! — sent me to my DVD shelf. I reached for Tornatore’s Oscar-winning Cinema Paradiso (Nuovo Cinema Paradiso in the Italian release) and popped it into the player.

This is a movie that improves every time I watch it. It’s a bittersweet tale of an irrepressible little boy Salvatore, nick-named Totò, in post-war Sicily who finds both father figure, and his future, at the local movie house Cinema Paradiso.

An important element, and one that’s really fun to watch, are the dozens of clips of movies we see — through Salvatore’s perspective – that are showing through the years at Cinema Paradiso. Some of the movies I recognize. Others are unknown to me.

Curious if I could find a roster of all these films that appear in the movie, I started searching the Web. Finally, on Italian Wikipedia, there they were.

I like the variety in Tornatore’s choices for the Paradiso. He’s not a film snob. In a movie that’s really a love letter to the cinema, Tornatore mixes Capra’s American middlebrow It’s a Wonderful Life with Vadim’s tacky Euro-flick And God Created Woman with Visconti’s art-house La Terra Trema with Ford’s classic Hollywood Stagecoach.

From Charlie Chaplain’s City Lights to Fellini’s I Vitelloni, the clips just keep on coming. If I had to pick only one, however, for sheer entertainment value, it has to be Silvana Mangano’s crazy dance to Il Negro Zumbon in Anna. (A nun with a past!) You can catch it on YouTube.

If you love Cinema Paradiso, check out the director’s cut. It’s a much longer and very different flim. If you’ve seen both, which do you prefer and why? It’s a multi-layered, lasagna-like love story-a good looking taste treat of Fellini’s remembrances of growing up in Rimini. Through the eyes of his alter-ego teen character Titta Biondi, Fellini tracks a year (from spring to spring) in pre-WW II Fascist Italy. 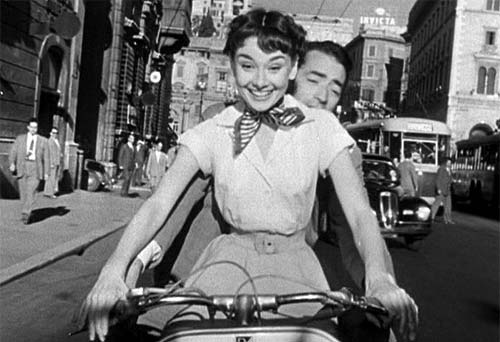 Audrey Hepburn and Gregory Peck explore the Eternal City on a Vespa in "Roman Holiday."

Audrey Hepburn and Gregory Peck explore the Eternal City on a Vespa in “Roman Holiday.”

Whether La Befana, the Christmas witch, or good old Santa Claus is doing the shopping, wannabe Italians will swoon for any of these DVDs in their stocking. Our Top Ten “Discover Your Inner Italian” movies, in chronological order, are . . .

Roman Holiday (1953) Beguiling postwar Rome is the real star of William Wyler’s bittersweet masterpiece, although ingénue Audrey, in top gamine form, gives the Eternal City a run for star billing. She did receive the Oscar, after all.

Three Coins in a Fountain (1954) Three single American women in Rome: Each throws a coin into the Trevi to wish for the man of her dreams. As Sinatra crooned, “Which one will the fountain bless?”
END_OF_DOCUMENT_TOKEN_TO_BE_REPLACED