C’era una volta. . . once upon a time. . . Max (Massimo Melani) met Wally (Walter Sanders) in Firenze. Here’s the story in their own words. 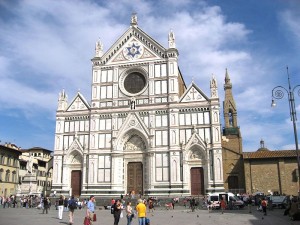 Massimo
First, a few words about the Leather School: Workshop, Laboratory and Show Room of the finest leather goods situated in the old Franciscan monastery of the Santa Croce Basilica in Florence. It was a marvelous place, as were the splendid people working there.

It all started with the Patron Marcello Gori, the owner and director of the Leather School.

Those years in the early 1970s were characterized by a kind of elite tourism. And the Leather School attracted many of these well-traveled, wealthy tourists from around the world. Marcello Gori ensured that his sales and service personnel were first class as well. The staff was multilingual, elegantly dressed, rather good looking and with long experience abroad. I was one of those.

One day in 1972, the owner presented us a colleague, an American boy from Chicago—a certain Wally Sanders, very smiling person, who looked like a survivor from Woodstock or San Francisco–absolutely the first foreigner who was going to work with us. 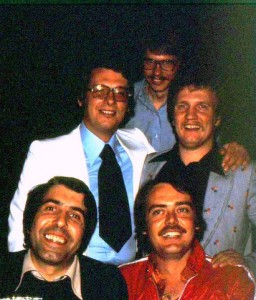 Some of the gang from the Leather School with Walter, top, and Max, bottom right.

I really wanted to stay in Florence…but needed a job to support myself. I visited the U.S. Consulate and saw a posting for sales help at the Leather School. A key requirement was the ability to speak English.

I went to the Leather School and was greeted in the first show-room by a young man. I introduced myself and told him I was looking for work. He suggested I go to the Director’s office and speak with Mr. Bella _ _ _ _. I walked down the hall practicing the name. Just when I reached his office, the young man grabbed my shoulder, pulled me away from the office, and laughed.

This was Max. He told me that he was joking about the director’s name. It was really Mr. Gori and had I addressed him as Mr. Bella _ _ _ _, my days at the Leather School would have ended before they began. 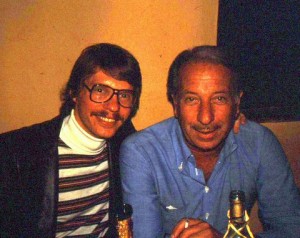 Max became a dear friend and Mr. Gori became my unofficial Italian zio…my uncle. He also became my testimonio (witness) when Sharon and I were married six years later at Santa Croce.

Massimo
Wally was universally liked, well educated, so intelligent, clever at work, full of sarcasm (like a real Florentine) and he loved life. We were all so young and the Leather School provided fine training for life. The work was often sheer amusement, money wasn’t lacking and neither were occasions for socializing.

We thought Wally would stay in Florence for one tourist season but he remained four years. . . finding here the LOVE he was dreaming for . . . but this is another story.

And the owner really loved him.

Walter
Working at the Leather School was an extraordinary experience. I met people from all over the world while living in one of the most attractive cities on earth. I made friends, including Max, whose friendship and generosity I’ve cherished for 40 years. The Florentine adventure changed my life forever. 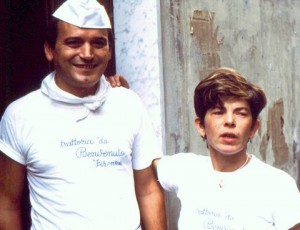 Loriano and Gabriella, at the time, proprietors of Trattoria da Benvenuto

That American boy soon forgot about fast food and embraced the wonderful food of Tuscany. His favorite restaurant was a typical Florentine trattoria called Da Benvenuto in via dei Neri between Santa Croce and Piazza Signoria. He became a regular there and the owners Gabriellina and Loriano knew him well.

We became real friends, for morning work break, we often went to Bar Gastone in Piazza Santa Croce for a panino con la Finocchiona and an excellent glass of Chianti Gallo Nero. For us, that was better than the usual cappuccino and dolce.

In the early ’70s Florence was still the country of Mescite and Fiaschetterie, they were very small premises that served good wine (mostly red) accompanied by various stuzzichini like crostini, boiled eggs, soft rolls with anchovy and butter, salumi, pickled herrings, and some other things that went well with each other. After 6 p.m., we often took a little tour to these places.

Florence was full of these places where you could taste il cibo da strada (street food), rosticcerie, friggitorie were the signboards on these kinds of shops where we enjoyed polenta fritta con “Salcicce,” “Polli,” “Lasagne,” “Baccalà” etc. Unfortunately some of these places like Cibreo and Roventini have disappeared, along with their characteristic dishes.

Walter
Max took me under his Tuscan wing. He taught me the nuances of Tuscan food. He guided me through the culinary calendar in which you could taste every season. He broadened my understanding of la tavola, and inspired me to taste and appreciate a wide range of culinary treats I might have otherwise missed.

Massimo
In Florence the king of cibo da strada is lampredotto and the throne of that kingdom is the Mercato Centrale. 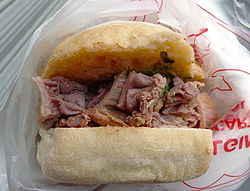 Lampredotto is a typically Florence panino.

Even now, every Saturday at 8 o’clock a.m., I go to Nerbone in the Central Market and eat a semelle (kind of Florentine bread) with lampredotto e salsa verde (tripe with a green sauce) or with bollito which is a boiled beef sandwich that’s bagnato—dipped in the beef’s own juices just before serving. And it is always delicious.

The bun is thick and hearty, a little baguette-like with flour on its surface. The beef is sliced coarsely to a medium thickness. It is placed on the big baguette. They don’t cover it until they top the beef with a couple of dollops of a red and green sauce respectively. And just before the sandwich is completed the entire bottom is dipped in the juice from the boiled beef.

The sandwich is extremely warm and filling, and just as you’re enjoying this Florentine comfort food your tongue happens on some of the sauces and your mouth is filled with sparks. The red sauce is sharp and hot with the green (mashed garlic, basil, and onion) is unbelievably bright. The sandwich ends up being a warm, hearty, comforting, exciting, bite of perfection. 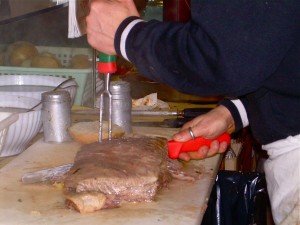 The one place in Florence that presents the richness of Tuscan food year-around is the Central Market. And the one person with whom you want to experience the Central Market is Max. He knows everyone. He’s funny, earthy and yet sophisticated. He’ll guide you to the freshest, most tasty treats of the day and steer you away from things that might be better another day. When I’m with Max, I laugh a lot and feel young.

Massimo
Saturday and Wednesday early in the morning, for a select very few people, Nerbone serves a special panino con stracotto a sugo made of guancia, beef cheek). When Wally comes back to the City of Flowers, we’ll have one and I can say I’m in a very good company.