At the southern tip of the Italian peninsula lies an Italy that few people know: a land of fragrant citron and bergamot orchards, ancient olive groves and terraced vineyards; a place of persistent tradition and ritual where the annual swordfish catch and hot pepper harvest are celebrated with elaborate festivals, and where women still roll pasta dough around knitting needles. 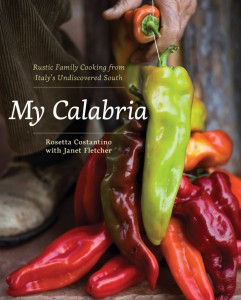 The land is Calabria, the long, skinny toe of Italy. In her stunning new cookbook My Calabria, author Rosetta Costantino seduces us with the food and heritage of the region where she was born. Hers is the first English-language book to document la cucina Calabrese.

Costantino, with the assistance of co-writer Janet Fletcher and photographer Sara Remington, casts a spell on readers, enabling us to practically smell and taste these wonderful rustic foods.

One rustic bread is the friselle, a dried rusk that is often rehydrated with juicy sweet tomatoes and fruity olive oil.

Pastas are myriad. Dromësat, a specialty of Calabrians of Albanian descent, resembles couscous. Cannaruozzoli is similar to ditali while schiaffettoni are small squares usually rolled around meat filling like a small cannelloni.

The cheeses are localized and depend upon the terrain. Coastal pastures and mountain meadows nurture cows who give milk for the luscious butirro, which is like caciocavallo on the outside with butter in the center.  Sheep and goats cling to the steep mountainsides to produce milk for Pecorino Crotonese and the ricotta that’s made from its whey. Unlike other parts of Italy, Calabrian pecorino is not necessarily all sheep’s milk. It can contain goat’s milk as well.

Pork is the king of meat, as Costantino writes in an essay called, “From One Hog, Food for a Year.” Fresh meat, fresh salsiccia, lardo, pancetta, and assorted dried cured salumi are some of the appetizing by-products.

More than 150 recipes include holiday specials such as Christmas Eve salt cod and Carnevale chiacchiere. There’s a chapter on putting up seasonal produce, such an integral part of the region’s cucina. Costantino provides intelligent ingredient substitutions at every turn. She even includes An Armchair Tour and Places to Stay, Eat, and Visit in Calabria.

And on my list of dishes to try before I die is tartufo al modo di Pizzo, a ball of chocolate gelato and hazelnut gelato with a molten fudge center. The cocoa-dusted orb is shaped to resemble a truffle and is the specialty of the picturesque fishing village of Pizzo. With considerable research and assistance from Vittorio Rigo of Chez Toi in Pizzo, Cosantino created a version for home cooks.

A Calabrian recipe I have prepared is this delightful soup which attracted me because of its unique marriage of a legume with seafood.

Drain the soaked chicken peas and put them in a 2-quart (2-liter) saucepan with 4 cups (1 liter) cold water. Bring to a simmer, skimming any foam. Adjust the heat to maintain a bare simmer and cook uncovered until the chick peas are soft, 45 minutes to 1 1/2 hours, depending on age. Add the salt and about 10 minutes before they are done. Let the chick peas cool in the cooking liquid. Strain and reserve the broth.

Make the shrimp stock: Peel the shrimp, reserving the shells. Devein the shrimp by slitting them down the back and pulling out the thin dark vein. Rinse the shrimp, then put them in a bowl and refrigerate until you are ready to poach them.

Put the shrimp shells, parsley, and salt in a 4-quart (4-liter) saucepan with 2 quarts (2 liters) cold water. Bring to a simmer, skimming any foam. Adjust the heat to maintain a simmer and cook until the liquid has reduced by half, about 45 minutes. Strain, discarding the solids, and set the stock aside.

Heat the olive oil in a 4-quart (4-liter) saucepan over moderate heat. Add the onion, carrot, celery, and garlic. Sautè, stirring often, until the vegetables are soft but not colored, about 5 minutes. Add the drained chicken peas and cook with the vegetables, stirring occasionally, for about 5 minutes. Add 3 cups of the shrimp stock. Bring to a simmer and simmer gently for 10 minutes to meld the flavors.

In a blender, puree the contents of the saucepan until completely smooth. Strain the puree through a fine sieve into a clean saucepan, pressing on the solids to extract as much flavor as possible. Using the reserved chick pea broth (3 cups of broth will probably be sufficient), thin the puree to a velvety consistency. Reheat the puree over moderate heat. Taste for salt.

While the soup is reheating, bring the remaining 1 cup shrimp stock to a simmer in a 10-inch skillet over high heat. Add the reserved shrimp and cook, turning once, until they turn white, 1 to 2 minutes. If the chick pea soup still seems a little thick, use this flavorful shrimp stock to thin it.

To serve, divide the hot soup among six bowls. Divide the shrimp among the bowls. Garnish each serving with a sprinkle of crushed anise seed and a dusting of hot pepper. Serve immediately. 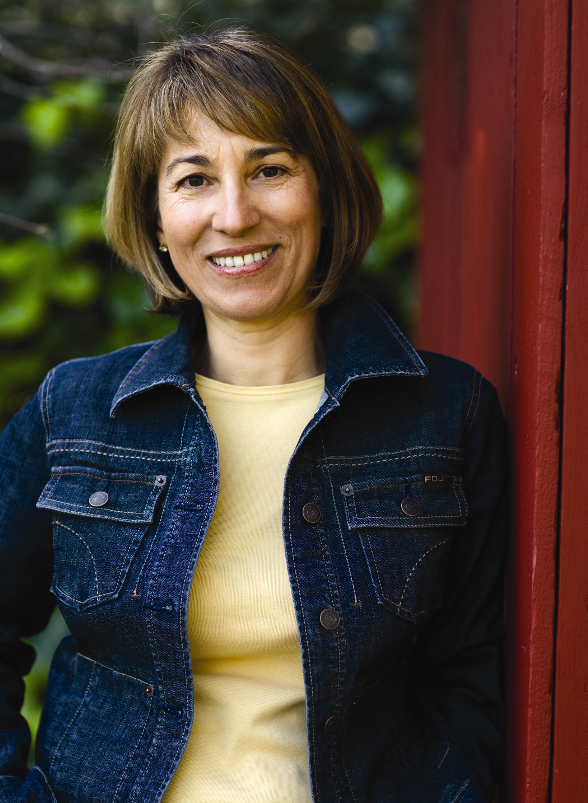 Rosetta Constantino holds a degree in chemical engineering from the University of California, Berkeley and worked for 20 years in the Silicon Valley. She emigrated from the town of Verbicaro, Calabria to northern California at the age of 14 with her parents Maria and Vincenzo Dito. She and her family live in Oakland near her parents where her father gardens year-round and her mother continues to share her Calabrian culinary heritage with her daughter. You can visit Costantino or purchase her book at www.cookingwithrosetta.com