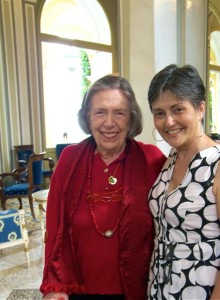 Jean Salvadore (left) with SimpleItaly’s Sharon Sanders in the lobby of Villa D’Este.

How does one train to be the international ambassador for Villa d’Este, one of the grandest hotels on earth?

The legacy is daunting. Villa d’Este was built in 1568 on Lago di Como as a Cardinal’s summer palace. In 1873, it was transformed into a luxury hotel that has pampered and protected its guests. Many, certainly not all, are celebrated: musicians from Giuseppe Verdi to Bruce Springsteen. . . statesmen Jawaharlal Nehru of India to Prince Ranier of Monaco. . . writers Mark Twain to Joseph Heller. . . film directors Alfred Hitchcock to Woody Allen. . . fashion designers Bill Blass to Donna Karan. . . and on and on.

So, does one train to be the public face of such a legendary property? No, one simply has to be Giovanna “Jean” Govoni Salvadore.

I met Jean on a tour of Villa d’Este as she greeted our Central Holidays-sponsored group of journalists and travel counselors. She seemed so down to earth, putting us at ease with warm words and cool Prosecco. Simply chic in black trousers accessorized with a lipstick red walking stick and knit top, I sensed that at age 85, she is cooler than I’ll ever be if I live to be 185.

Her latest achievement is My Dolce Vita: A Memoir which is as irresistible as it is inspiring. As for so many of her generation, WW II shaped her life in ways she could probably not have imagined as a child. 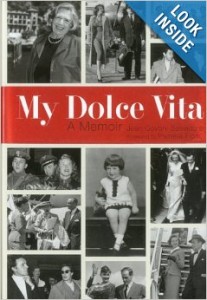 In her memoir, Jean Salvadore shares the rich experiences, not always sweet, of her extraordinary life.

Jean was born Giovanna Govoni in 1926 to Italian parents living in Paris. Her father was a foreign newspaper correspondent and her mother a librarian. She had younger twin brothers. Her father’s career as a newspaper correspondent also took the family to Great Britain so young Giovanna spoke fluent English. In 1939 when the war broke out the family returned to Italy, settling in Rome.

The war years under German occupation brought hunger, cold, and fear, as well as more prosaic adolescent challenges of trying to fit in with a group of new kids. With flaming red hair, freckles, and Italian language fumbles, Giovanna stood out as a target for teasing. In the book, she fondly recalls a sweet chum Paolo Salimei who always stood up for her.

“We often walked to school together. One morning, without warning, I heard a shot, and Paolo fell to the ground in a pool of blood. It all happened so suddenly . . .I can only assume it was a German sniper. I became utterly hysterical. . . .Paolo’s death was a horrifying event, but many people witnessed these terrible things.”

June 5, 1944 was a pivotal day. Giovanna and her mother were among the throng cheering as General Mark Clark led the Allied troops into Rome. An American in a Red Cross uniform and an armband “Stan the Donut Man” approached them when he overheard them speaking English. Stan Anderson recruited Giovanna on the spot as a volunteer to distribute coffee and donuts to the oncoming troops. Just one glitch. He said Giovanna was too difficult to pronounce. “We’ll call you Jean,” he pronounced and the name has stuck.

Jean wasn’t paid a salary but she and her family received something of even greater value. They dined on Red Cross donuts for many nights. After the Canteen, she was hired at the American Red Cross Club to wrap homebound parcels for soldiers. She was entitled to one meal per day, a near luxury compared to the situation just before liberation when she and some friends had risked their lives to steal a few loaves of bread from a German occupied bakery. She writes, “I thought that Spam was a godsend and that from that time on, I decided to always keep a tin of Spam in the house. . . . as long as I had some Spam, I would never go hungry.”

In 1946, Jean applied for and was accepted in a position as ground hostess for TWA Airlines. Although the job didn’t take her aloft, it did launch a brilliant career. The post-war flowering of both industry and the arts came to be dubbed “The Italian Economic Miracle,” and Jean was doing her part to make that transformation happen.

As the 1940s came to a close, Jean was named TWA’s public relations manager
in Italy and became the wife of Luca Salvadore, then the airline’s Italian sales manager.
Jean did not see the two positions as mutually exclusive although friends and relatives were shocked that she planned to continue working. Presaging Bob Dylan and the feminist movement, Jean calmly replied, “Times are changing. I plan to do it all.”

I won’t go into the long list of writers, statesmen, movie stars, and assorted celebrities that she met during her tenure or her entertaining anecdotes about them. For once, “too numerous to mention” is not cliché but truth. There is one whom she did not meet but I won’t give that away, either.

She did have it all during her 20 years with TWA. She was happy in her marriage, enjoyed a rewarding career, a cherished Roman home, son Andrea, daughter Claudia (and now four grandchildren), a steady stream of canine companions, and frequent travel especially to her beloved NYC.

But one day in 1966, all of that changed abruptly. Without consulting her, Luca announced he had taken a position in Milan with publishing magnate Angelo Rizzoli. The family was to move. Jean was to quit her job because Rizzoli worried that friends would think he paid inadequate salaries if his editors’ wives worked. Jean was stunned but remained “the dutiful Italian wife” and moved the family to Milan. 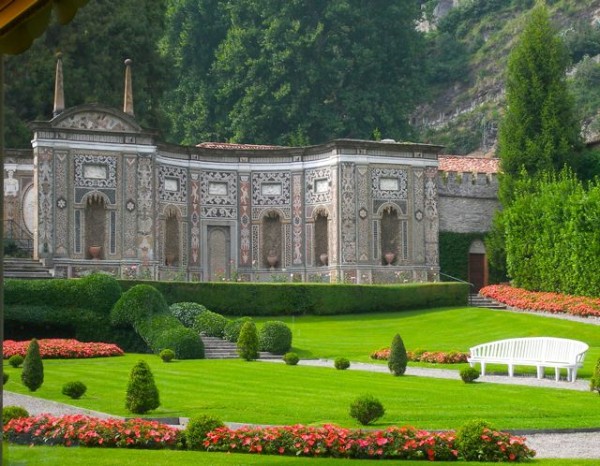 A Place on Lake Como

Not even someone as powerful as Angelo Rizzoli could keep Jean on ice for long. Within a few months, Villa d’Este came calling. “The hotel offered me a PR consulting job,” she writes. “I was to bring to Villa d’Este the kind of glamour and panache that had come to TWA during my tenure there.” Since 1967, that’s exactly what she has done. The myriad relationships she’s formed during this tenure has been both professional and personal. For Jean, they really are one in the same.

Working closely with her colleague Annamaria Duvia, she brought her creative energy to promoting the Villa. She enticed Christie’s auction house of London to hold its first post-war auction in Europe at the hotel and, with Chef Luciano Parolari, she established the Villa d’Este cooking school. They hosted Julia Child, James Beard and other culinary royalty.

Jean lives alone (Luca passed away in 1988) in an apartment behind the gorgeous mosaic wall that is the entrance to the Villa d’Este gardens. Her wooden door is tucked at the far end, shaded by an enormous pine that Luca planted as a sapling. It really is like something from a fairy tale.

She writes, “Even though I have now been living on the grounds of the hotel for more than forty years, I still enjoy looking at this heavenly place through the eyes of a photographer or through the description of a writer who has just fallen in love with the ‘villa on the lake’ for the first time.”

Have you been to Villa D’Este or Lago di Como?
What are your dolce vita memories?

« Love Is All You Need
Pop-up Cooking Class: Pasta »