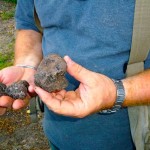 Acqualagna, Italy–Two dozen miles southwest of the Adriatic coastal city of Pesaro, the placid plain morphs into picturesque hills near Acqualagna with 5,000-foot-high Monte Nerone and other peaks in the distance. The terrain gets rugged quickly.

Our bus struggled up a winding dirt road to deliver us to truffle hunter Giorgio Remedia’s azienda. Although we’d been advised to have proper footware, the sight of Remedia’s knee-high rubber waders gave some of us pause. He had a no-nonsense demeanor that could perhaps be attributed to his other job as chief-of-police in Acqualagna.

Remedia explained that this area is rich in truffles. He said that they’re a symbiotic fungus that grow on the roots of oak and poplar trees. The Acqualagna area yields different varieties of tartufo bianco (white truffle) and tartufo nero (black truffle) almost year round. 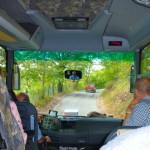 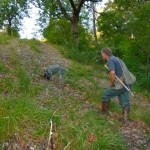 Giorgio Remedia and Chicca set out in the woods to find the province’s prized black truffles. 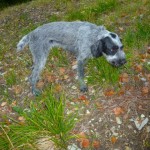 Chicca, the professional, poised for action. 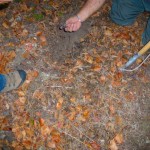 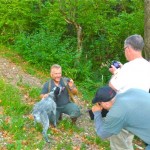 Remedia and Chicca ready for their closeup. 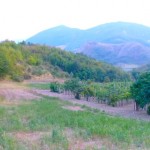 Vista from the truffle woods of field, vines, hills, and mountains. 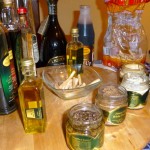 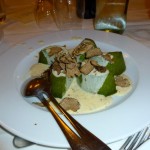 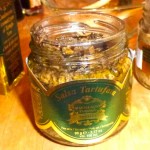 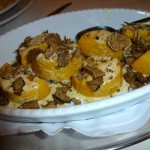 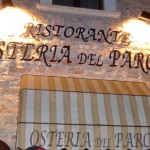 Ristorante Osteria del Parco is all about tartufi. 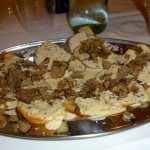 This community is seriously all about truffles. It’s said that one-fourth of the residents are qualified truffle hunters and 70 percent of Italy’s truffle dogs are trained here. The white truffle is celebrated each autumn with the Fiera Nazionale del Tartufo Bianco. This year’s event begins at the end of October.

To find the elusive funghi, Remedia trains dogs from the time they’re puppies. He told us that no particular breed is optimal. He looks for animals that display a good sense of smell and a talent for scanning an area with a swiping motion. To train a puppy, he places bits of truffle in a perforated plastic film canister. He lets the puppy mouth the canister to familiarize it to the aroma. Nest step is to spade some holes in the woods in which to bury truffles for the dog to find. Soon, the dog learns to want the truffle enough to hunt for them. Dogs may be active for as long as 15 years and prized animals can be worth as much as 5,000€.

Remedia brought out five-year-old Chicca and it was time to hit the woods. We slogged through some fresh mud (it hadn’t rained for weeks until the day we arrived) trying to keep pace with the wiry gray hound. In no time, she dug up a black truffle which Remedia snatched with one hand as he fed Chicca a different reward with the other hand. Otherwise, she would have gulped the fungus (world’s priciest doggie treat!). And so they continued for about half an hour, finding some white truffles as well as black.

How do you say, “an embarrassment of riches” in Italian?