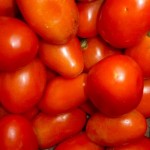 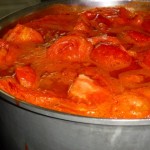 Wash the pelati in cold water and cut in half or quarters. No need to remove the core. 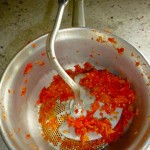 A food mill purees the cooked fruit and simultaneously screens out the skin and seeds. 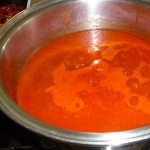 Skim any light-colored foam that rises to the top of the passato as it reduces.

In September, when you can buy 20 pounds of pomodori pelati (plum tomatoes) for $15, you’ll know what to do.

Simmer the pelati in a big non-aluminum pot until they fall apart. Pass the contents through a food mill which purees the fruit but screens out the skin and seeds. 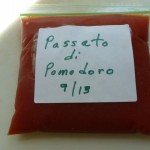 Reduce the passato (puree) in a large pot until excess water evaporates and  it thickens to just the right consistency to cling to strands of pasta.

Cool and freeze in 1 cup bags.

In January, you’ll say, I did the right thing.

Cuisine: Italian
Author: Sharon Sanders
Serves: 12 cups
Adding some vodka to the passato brings out the sweetness of the fruit. The alcohol, which evaporates during cooking, dissolves certain flavor compounds that neither oil nor water can release. If using vodka, add ½ cup to the puree (step 4) as it reduces.
Ingredients
Instructions
3.2.1255
« On the Truffle Trail in Le Marche
Marcella Hazan »