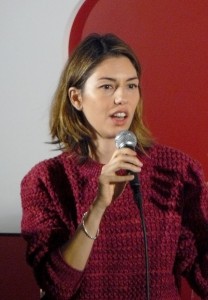 As an admirer of Academy-Award nominated director Sofia Coppola, I wish her tanti auguri on her marriage to Phoenix front man Thomas Mars. The fairy tale ceremony was held on Saturday at the Coppola family estate in Bernalda, in the arch of the Italian heel, in the region of Basilicata.

Imagine if Don Vito Corleone’s only daughter Connie were finally to marry boyfriend Carlo Rizzi after being with him for six years and bearing two daughters, as the real-life Sofia has done. Forget the over-the-top wedding scene opening the film. More likely, Connie’s Mom, clad all in black, would be weeping, begging Don Vito to quit saying, “Connie’s dead to me now.”

And what about son Michael’s sun-kissed Sicilian nuptials with the luscious Apollonia?

It was a nice diversion from the blood and gore but we all know how badly that ended. All we have left from that union is the saccharine “Speak Softly Love” theme. Composer Nino Rota may be a musical genius but we all know he phoned in that one for the money.

So, Sofia. We applaud your independent spirit.

Perhaps this is sweet payback for Dad casting you in The Godfather III?