Inner Italians who are fans of the award winning AMC TV program Mad Men received a gift-within-a-gift with Sunday night’s “Souvenir,” the eighth episode of the third season. (You can still catch it at various times on October 6 and 7. (Check the AMC schedule for days and times.)

We learn that gorgeous Betty Draper, frustrated early 1960s homemaker and wife of sizzling ad man Don Draper, has an Inner Italian that’s been stifled in the suburbs (just in case we don’t “get” that Betty’s really trapped, the Drapers reside in Ossining, NY, where Sing Sing Maximum Security Prison is located). Betty’s along for the ride on Don’s two-day visit to Rome (hmm, let’s see . . . fly across the Atlantic, have dinner, fly back across the Atlantic?) to check out client Conrad (call me Conny) Hilton’s property, the Rome Cavalieri. 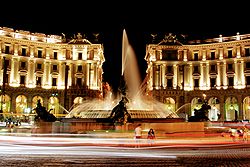 To many Americans in the early 1960s, Rome seemed the height of jet-set glamour -- la dolce vita -- the sweet life.

Betty no sooner says grazie to the bellman than she’s on the phone in fluent Italian (albeit, not with a fabulous accent — not sure here if creator Matthew Weiner wanted her to speak with an accent or if actress January Jones had bad coaching) making an appointment at the parrucchiere (hair stylist). Next we see her in an outdoor cafe straight out of Fellini’s La Dolce Vita, which was released in the U.S. in 1961, just a couple years before the Drapers fictional jaunt.

Betty is straight-up channeling the sultry ‘60s Italian actress Virna Lisi with a blonde updo, major eyeliner, and a very little black dress. Two Italian men at the next table take notice. Betty chooses to go with the man at the opposite table, who is her own husband Don, acting mysterious, just as he does when he’s away from her in Manhattan. (Check out the insightful blog commentary by Adam Wilson How Betty Draper Learned Italian (and Why I Don’t Care) at thefastertimes.com.

Rome has revitalized the troubled Draper marriage as we see when Don and Betty return to their room after dinner. The view from their window, with St. Peter’s dome in the distance, looks like the photograph on the “Deluxe Room” page at the Cavalieri Hilton Web site. (This show is known for its near fetishism in period detail, but seriously, this view looks like the art department just enlarged the photo.)

Back at home in her knotty pine kitchen, Betty — usually seen in demure shirtwaists — is wearing a vibrant Emilio Pucci (or maybe a knock off) silk jersey print dress, cutting edge fashion at the time. Pucci was a Florentine nobleman whose early ‘60s designs cut the thread with the staid ‘50s.

Although she looks fabulous in the Pucci, Betty’s boring old life is not a good fit. As she tells Don, “I hate this place. I hate our friends. I hate this town.” She’d rather be in Italy, certamente. But all she gets is a souvenir charm of the Colosseum from Don.

What would Italians make of this episode? I’m not sure and they won’t have a chance to find out until probably 2011. The second season of Mad Men premieres December 28, 2009 on Fox TV Italy. Click here for some amusing clips of the hard-drinking, hard-smoking, hard-loving, and occasionally hard-working Sterling Cooper Advertising Agency gang speaking in Italian.