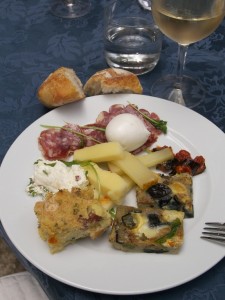 An antipasto plate from Salerno province features fresh mozzarella di buffalo at 12 noon on the plate.

I think I know the reason that production of mozzarella di bufala increased by more than 11 percent in the first half of this year (according to the Mozzarella di Bufala Campana DOP consortium).

The bump in output coincided with my visit to Salerno Province—a major producer of mozzarella di bufala—where I savored the heavenly fresh cheese at every opportunity.

I learned that until you eat DOP (“protected designation of origin” zone) mozzarella on the day it is produced, you haven’t eaten true mozzarella. The milk of water buffalos is higher in fat (about 9 percent) than cow’s milk (about 4 percent) and fat = flavor + mouth feel. Tangy and supple mozzarella di bufala is simply divine.

Our group of travel professionals was invited to watch the artisans at the Fattoria del Casaro in Paestum making mozzarella. As we entered the spotless production room, we were cautioned to tread carefully. The tile floor was slick from dissolved milk fat splashing out of vats filled with steaming water and walnut-sized cheese curds.

The mozzarella men pulled the curds with a long stick to create skeins of cheese. Prior to the scalding stretch fest, the curds relaxed  in warm water for about four hours. The name mozzarella comes from the verb mozzare, meaning “to cut.” The stretched curds are pinched by hand  into varying sized balls or braids. 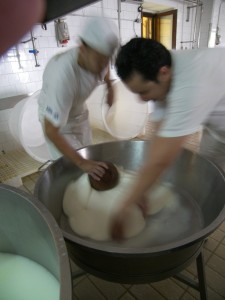 In the U.S., fresh mozzarella di bufala is available in big city shops but is very expensive. A good alternative is cow’s milk mozzarella, called fior di latte “flower of milk.” Since freshness is its calling card, overcooking mozzarella is a big no-no. Melting it atop pizza is about as much cooking as it can take.

In summer, a classic way to savor fresh mozzarella is in insalata caprese, named for the island of Capri. The dish is prepared by placing alternating slices of mozzarella and ripe tomatoes on a plate and drizzling with extra-virgin olive oil, fresh basil, salt and pepper.  New York-based cookbook author Arthur Schwartz, who teaches cooking classes in Paestum, writes in Naples at Table that vinegar is never used in a caprese. Also, he recommends cooks outside of Italy select ripe Big Boy tomatoes as a good stand in for the Caprese pomodori cuore di bue.

Here is a recipe from Naples at Table for a wonderful pasta dish made with fresh mozzarella.

(Spaghetti with Eggplant and Mozzarella)