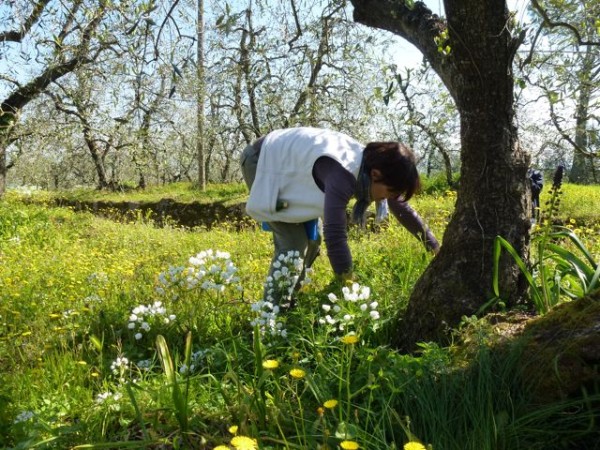 According to our edible wild plants expert, Marta, the delicate white blooms of the wild garlic in the foreground are only good for looking not eating.

“Mother Nature gives us what we need every day,” said Marta, l’erborista, as she greeted our SimpleItaly Adventure in Tuscany tour group on a recent blindingly bright spring morning in the piazzetta at Montestigliano agriturismo.

We passed around her information sheets as she explained that her grandfather, Alterio, educated her in plant foraging when she was a child. An “Italian cowboy” who owned a big farm in the Maremma, she would scour the fields and woods with him to identify and pick wild herbs and mushrooms that her grandmother would transform into good things for the table.

“Wild herbs are great fortune for us. . .for the health of the earth and biodiversity,” said Marta, who is affiliated with an erbandano cultural association that conducts foraging tours in the area southwest of Siena.

“My grandfather said, ‘Open your heart in nature but be careful. Open your eyes. Mother Nature has two faces, one beautiful, one dangerous,’ ” she said, then advising us to watch out for snakes, spiders, and toxic plants. (Her warnings did not go unheeded. I doubt that few in our intrepid band would have had the courage to forage without a Marta leading the charge.)

She led us to a nearby low stone wall where she opened a meticulously annotated reference book with scans of numerous edible plants. Then it was off to the nearby olive grove with our plastic tub for gathering the ingredients for our lunch. The undergrowth was much more lush than typical for the season due to heavy late winter rains. Marta pressed down the high grasses to look for the herbs. 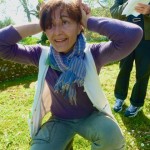 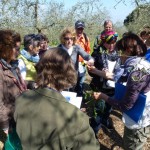 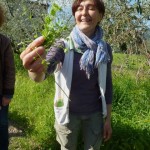 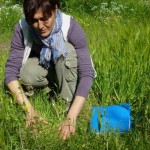 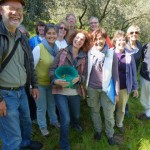 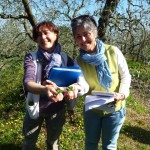 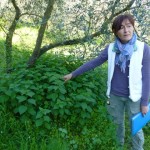 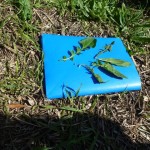 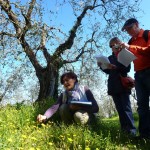 When she found the first tender leaves of piantaggine (plaintain) she held two leaves to the crown of her head to mimic their nickname “ears of the hare.” She resembled a woods sprite.

Marta led us to a different olive grove where behind an old stone farm building, she found a flourishing ortica (stinging nettle) plant. She assured us that the prickly leaves would be tasty when we cooked. In fact, they are inedible raw.

“Ortica is the queen of the wild plants,” Marta said. “It’s good for the liver. The cooking water is good for the hair.” In past times, the peasants would weave storage bags from the fibrous stems.

Next stop was the kitchen where, with Marta’s tutelage, we’d cook Mother Nature’s gifts.