Magna Grecia! Paestum is the site of well-preserved Greek temples dating to 600 BC. Sharon had visited Paestum some years ago on a press trip and wanted to share its wonders with me. Modern Capaccio-Paestum is also a thriving seaside resort with a wide range of facilities. 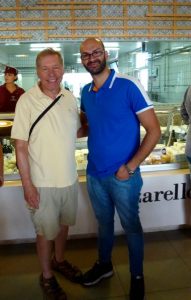 Walter and his taxi hero Antonio.

It was Ferragosto, the August holidays, when we arrived at the train station. We stepped out into the afternoon and encountered one person: a taxi driver named Antonio. We introduced ourselves, he loaded our luggage, and asked “Where to?”

“We have no reservations…anywhere,” I said.

“That could be a problem this time of year, but don’t worry, we will find something.”

He immediately called his father who runs a tourism coach business and is well connected with the local lodging providers.

The dad provided suggestions. Antonio called hotels while we drove the seafront hoping for a cancellation or a no show. No luck. We moved away from the seaside to agroturismo establishments located near the numerous mozzarella di bufala enterprises inland. Nothing. We even looked at old style rooming houses. Still nothing. 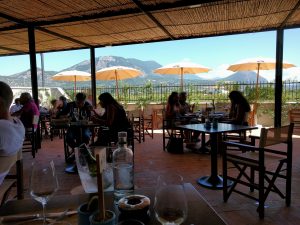 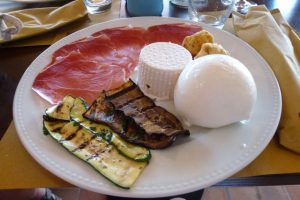 The antipasto that could have been a meal. The ricotta di bufala was a revelation. 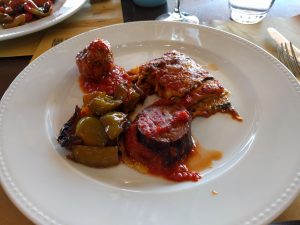 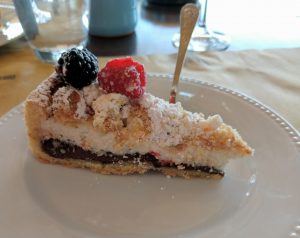 Antonio called his sister to network with her. After more than an hour of searching we had a lead on a country house owned by one her friends. It was away from the sea…but it was available. 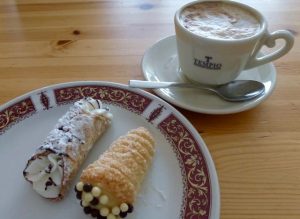 It turns out the home belonged to a widower who died in January. He had willed it to his two daughters who were hoping to run it as tourism lodging. We were destined to be the first paying guests.

The Antonio network had worked. Over the course of several days, he squired us to some of his preferred spots: Azienda Agricola Tempio for a divine breakfast of bufala milk ricotta stuffed cannoli and Azienda Agricola San Salvatore 1988 for a marvelous fixed price summer lunch of local foods.

We used Antonio for our long hauls to Pasteum, and even once to stock up on groceries. He was a gem to us.