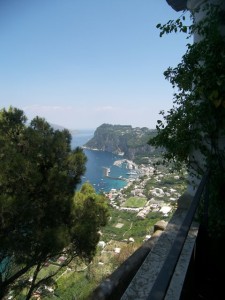 Villa San Michele is perched on a cliff top in Anacapri.

The village of Anacapri sits more than 1,000 feet above the coast on the fabled island of Capri. The white stucco structures are blinding under the Mediterranean sun but nothing in Anacapri dazzles more than Villa San Michele.

The singular creation of Swedish-born physician Axel Munthe (1857-1949), Villa San Michele includes a museum, gardens, and cultural foundation supervised by the Swedish Institute of Classical Studies in Rome. During my visit on a June afternoon, visitors were amazingly few. What a gift it was to savor this magical spot at my leisure.

After threading my way through the center of Anacapri, past vendors hawking sandals and sunglasses, coral and mass-produced maiolica, I turned at the carved marble sign that read “Capri Beauty Farm” (a spa?) and walked down Via Axel Munthe.

The simple white stucco façade of Villa San Michele looks vaguely Spanish. A few antiquities are positioned out front. With a visitors guide book, I navigated the bedroom, study, and kitchen that remain as Munthe had furnished them and lived within their walls. 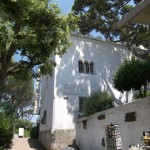 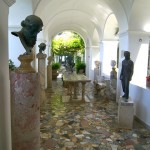 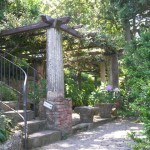 Enamored with Capri from previous visits, it was in June of 1895 that Munthe purchased a tiny house and vineyard in Anacapri from the carpenter Vincenzo Alberino. It stood on the ruins of an ancient Roman summer villa. At the same time, Munthe bought adjoining land and a ruined chapel from other sellers. On this ground, he built Villa San Michele from scratch with his own money and design, and the labor of his neighbors. At the turn of the 19th Century, the village was impoverished. A foreigner leading such a construction project was unprecedented since ancient times. 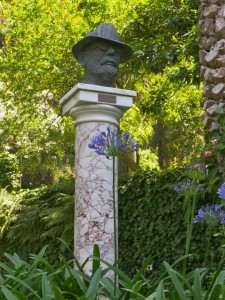 “My home shall be open in order to let in the sun, and the wind, and the voices of the ocean, like a Greek temple, and there shall be light, light everywhere!” Munthe wrote.

But Munthe wasn’t a would-be Caesar carving out a pleasure palace. The structure reflected his Pantheistic life view. With its minimalist interior-design, Villa San Michele could grace the pages of today’s Architectural Digest. The house and grounds seem so modern that it’s remarkable the villa was constructed in over-stuffed Victorian times. According to the curators, “The evocative architecture was intended to form a framework around Munthe’s collection of relics and antiques whilst simultaneously emphasizing the beauty of the surroundings. The buildings and the arrangement of the collections were created in a symbolic, romantic style according to the ideas of the turn of the century.”

A Home for the Soul

Munthe’s friend Henry James described Villa San Michele as, “A creation of the most fantastic beauty, poetry, and inutility I have ever seen clustered together.”

The source of the artifacts in the villa and grounds are somewhat shrouded in mystery which Munthe cultivated. The pieces are primarily Roman, Etruscan, and Egyptian and most experts believe Munthe purchased them from curators on the mainland. A head of Medusa, a mosaic table, an Egyptian sphinx and a bust of the Roman emperor Tiberius are prominent objects in the collection. A small atrium holds a cistern to collect rain water, a necessity on the parched island.

As interesting as the residence is, I gasped when I entered the Sculpture Gallery and the curved colonnaded pergola overlooking the Bay of Naples. Of this glorious space, Munthe wrote, “The soul needs more space than the body.” 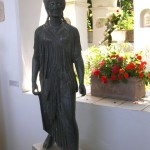 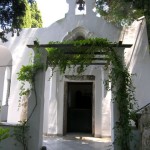 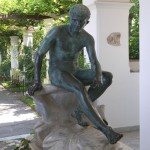 The silver eyes of a statue of Artemis, the Greek goddess of the hunt and forest animals, seemed to look right at me. Nearby is a bronze copy of The Resting Mercury, a gift from the city of Naples to Munthe in gratitude for his volunteer work during the 1884 cholera epidemic.

The varied plantings include pine, palm and cypress trees. Among the acanthus, myrtle, broom, rock rose, camellias, azaleas, wisteria, hydrangeas, roses and hundreds of other plants, something is always bound to be in bloom in this ever-green giardino. On the upper part of the garden sits the restored medieval Chapel of San Michele and part of a Roman ruin with frescoes in Pompeian red. Tom and Fellow, the beloved dogs of Sweden’s Queen Victoria, are buried nearby with their names carved on simple stones.

Further on is The Olivetum, a pavilion set among olive trees, which houses a permanent ornithological display. The exhibits document the thousands of migratory birds who rest on Capri during their grueling journey from Africa to Northern Europe. Munthe led a one-man crusade to ban the ancient practice of commercial quail hunting on the island. He purchased the prime capture ground Mount Barbarossa and the castle that stands upon it to aid in stopping the practice.

The mountain, above the villa, is now the home of the Capri Bird Observatory research facility and a habitat to a number of rare Mediterranean plants. The Foundation has gained an informal recognition of the area as an Italian nature reserve by signing an agreement with the World Wildlife Federation.

As I explored San Michele, I found myself increasingly captivated by the abiding presence of Axel Munthe. He was not only a physician but was a best-selling author, sailor, musician, naturalist, and philanthropist. Though a loner by nature, he traveled in royal and celebrity circles. His love of animals was legendary. He adored dogs and believed they were the creatures with the highest moral standing. His kindness and free medical care to the poor of Capri is well documented.

A placard at the Villa details Munthe’s dedication to animals.

Munthe’s The Story of San Michele, published in English in 1929 and translated into more than 40 languages, was an international sensation, the Under the Tuscan Sun of the day. With an engaging, witty style, he chronicles his emotional and intellectual journey as a son of the north hopelessly seduced by the Mediterranean. He also shares experiences in Paris where he earned his medical degree at the age of 22, time in his native Sweden, and in Rome where he set up practice at the foot of the Spanish steps in the house in which Keats lived. Not once in 400-plus pages, however, does he mention his two wives and two sons.

For someone who so worshipped the light, Munthe’s last years were dark. After eye surgery blinded him in one eye, sight in the other eye increasingly failed and it was hard for him to endure the brilliant light at San Michele. Munthe moved into the darker Tower of Materita on Capri.

In The Story of San Michele, pondering an observation by Dante, Munthe writes, “Is it true that there is no greater suffering than to remember our past happiness in our misery? I for one do not think so. It is with joy and not with sorrow that my thoughts go back to San Michele, where I have lived the happiest years of my life.”

To read more about Axel Munthe and Villa San Michele, check out these books, available from used book sellers on www.amazon.com

The Story of San Michele by Axel Munthe

Axel Munthe, The Road to San Michele, a biography by Bengt Jangfeldt

This article was first published in Dream of Italy, Nov. 2010.

Italy is filled with tucked-away treasures like Villa San Michele. What “secret” spots have you savored?

« St. Francis in Brooklyn
From Italy to Your Table »