Tormaresca vines planted on the Adriatic coast at Masseria Maime in Puglia.

After 26 generations and more than 600 years in the wine business, the Antinori family of Tuscany has expanded its involvement in Puglia. This is a big deal. It certainly got my wine juices going as we received confirmation to visit the new Tormaresca operation at Masseria Maìme in the Salento DOC.

In the 1990s, the Antinori family invested in Puglia, the heel of Italy, a region that has traditionally been recognized more for the quantity, than the quality, of its wine grapes. A number of economic and terroir factors helped drive the decision. Land prices (especially compared to Tuscany) were inexpensive. Soil conditions and climate were conducive to expanding production of native grape types and some international varieties as well.

Maria Tolentino De Bellis, Tormaresca’s marketing and PR representative, suggested we meet at the San Pietro Vernotico train station. I thought it was odd that we couldn’t just connect at the winery. It didn’t take long to realize that the Antinori presence in Puglia was large – but subtle. Maria drove us up a gravel road marked only by a modest, hand-painted sign that read Vigneti del Sud, “Southern Vineyards,” with no mention of the super-star Antinori name. 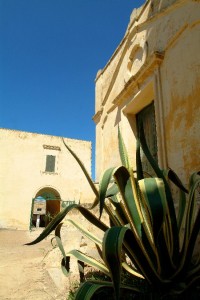 The sun is a powerful prescence on the Salento Peninsula.

At the cantina, she introduced us to Giuseppe “Peppino” Palumbo, the CEO of Tormaresca. He was dressed in work clothes and had the sun-drenched, weathered look of an executive who spends more time in the vineyards then he does in the board room.

I asked Peppino about the branding strategy behind the Puglian venture.

“Tormaresca is a fantasy name, a play on the Puglian dialect, and means Tower by the Sea,” he explained. “It’s also an extension of the Antinori philosophy to respect local tradition and original vines, while leveraging technology to improve the results. We respect the past, but we never stop innovating.”

We jumped into his SUV, and bumped out on rough trails alongside the vineyards. Peppino pointed out some Negroamaro grapes planted with a cordon trained system, as well as some older vines still in the traditional Alberello system — without support.

We headed east until we reached the beach grass and dunes of the Adriatic shore. “The terroir and growing conditions are perfect,” he said.

Back at the cantina, Peppino raved about indigenous Puglian grapes. “Negroamaro is wonderful. Primitivo (identified by enologists at U Cal Davis as the genetic clone of California Zinfandel) is well suited for this climate. And Aglianco, the red grape we grow further north at our Bocca Di Lupo vineyard, earned a 91 from Parker.”

I asked Peppino about two ancient Puglian grape types, Sussumaniello and Ottavianello I had learned about from Cinzia Rascazzo of Stile Mediterraneo.

Peppino looked pleased about the question and smiled. “Yes, we found some growing here and will preserve and cultivate them. We are experimenting with them now to complement Negroamaro and add a little color.”

The time was running late, and I asked Peppino if I could use a phone to call our next stop to let them know I’d be a little tardy.

“Who are you visiting next?” he asked.

“I have them in my cell phone.” He noticed that I looked a little surprised. “We’re not rivals. We both flow together in the same current of wine, and the trip is easier if we run together, not against each other.”

For a sampling of Tormaresca here in the U.S., pour these two.

Neprica IGT (Negroamaro, Primitivo and Cabernet grapes) I love this super-Puglian which is every bit as intriguing as a more expensive super-Tuscan.

Neprica is an IGT blend of Negroamaro, Primitivo, and Cabernet grapes.

Coming next: Our visit to Candido Wines. 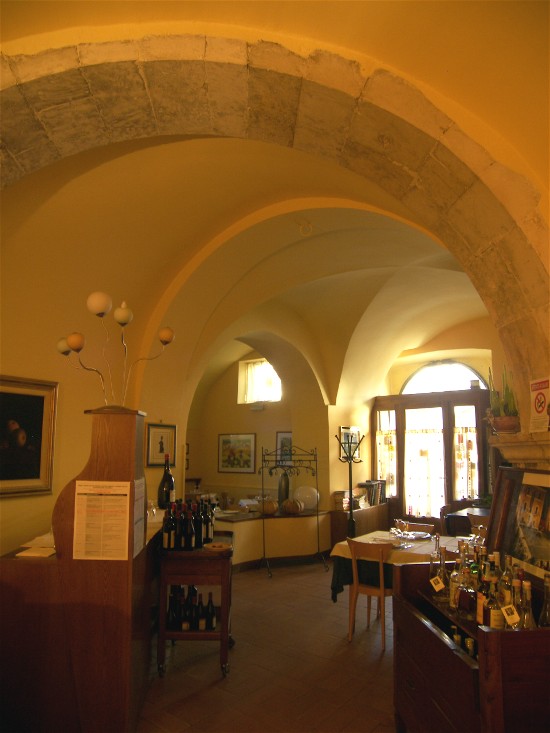 Ristorante Clemente in Sulmona offers the genuine dishes of Abruzzo.

We weren’t being fair to Ristorante Clemente. We knew it . . . but we couldn’t help ourselves. We had allotted one night, one dinner in Abruzzo, a region in which neither of us had passed time. We sought to “taste Abruzzo” in that one meal. No small order.

We were in the small city of Sulmona on our way to Puglia. Our Ital’guru Fred Plotkin, author of Italy for the Gourmet Traveler, picks Sulmona as his “Classic Town” of the mountainous region east of Rome. Ristorante Clemente appears first on his “Dining List” and his description appealed to us. For insurance, we inquired of our hotelier and a local barista where we should dine. “Clemente,” they both answered. We even scouted out the restaurant location, tucked on a tiny back street, so we’d have no problem finding it later in the dark.

So it was that Walter roused me from a my nap at 7:15 p.m. so we could arrive when the doors opened for dinner service. He worried that a place this touted would fill up fast. No such problem transpired. Upon entry, we were invited to choose our own table and selected one deep in the rear of the main room under a splendid stone vaulted ceiling. Stone and gesso walls the color of cantaloupe cream, exciting food-related art work, photos of family members and a couple canvasses and prints of Sulmona created a cozy setting. 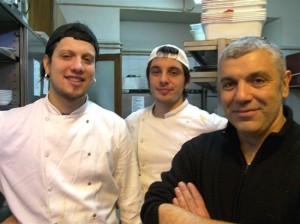 Chef/owner Clemente Maiorano, with warm brown eyes and salt-and-pepper Julius Caesar haircut-greeted us with a one-page menu. We asked if we could place our appetites in his able hands. He seemed pleased and disappeared through the archway into the kitchen. The waiter took over and reminded us how perfect service in Italy can be. Not obsequious, not aloof, just professional.

END_OF_DOCUMENT_TOKEN_TO_BE_REPLACED 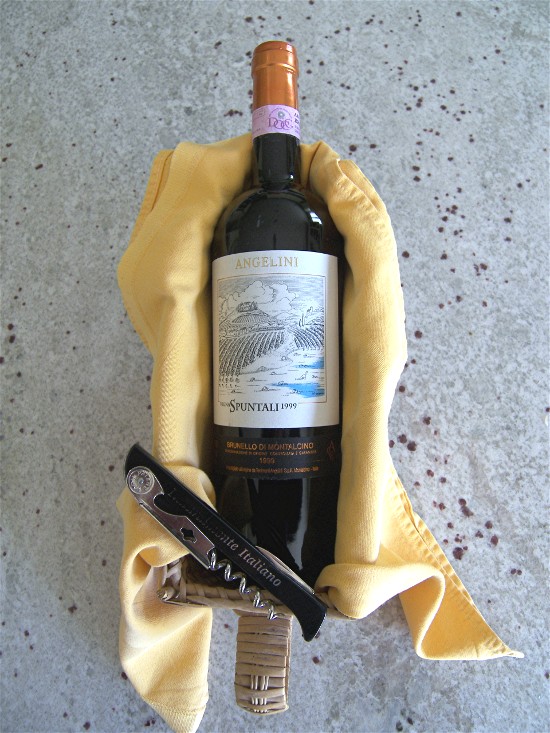 Sharon and I will be opening a 1999 Tenimenti Angelini Brunello di Montalcino. My favorite wine opening gizmo? The classic waiter's corkscrew.

I’ve never met Dorothy J. Gaiter or John Brecher, the informed and entertaining proprietors of the “Tastings” column in The Wall Street Journal, but I’ve heard them on NPR and have been reading their column for a long time. They are smart, real, and fun-loving in their approach to wine.

They created the “Open That Bottle Night” concept 10 years ago … and what a wonderful concept it is.  It grew as a response to the most common question they receive from people who are saving a bottle of wine for a special occasion. “When is the bottle ready to drink?”

Their answer is perfect. “You know that bottle of wine you’ve been keeping around for that special occasion that never arrives or because the wine is always going to be better tomorrow? Open that bottle!”

OTBN is celebrated on the last Saturday in February … so this year, the 28th. What a perfect time of year to invite friends over for a wonderful dinner and share the wine you’ve been saving.  And while you’re at it, propose a toast to Dottie and John for helping you open that bottle.

You can watch Dottie and John talk about Open That Bottle Night at www.WSJ.com/Tastings

Speaking of opening that bottle, tell me what kind of corkscrew, equipment or gizmo you prefer to get the job done. 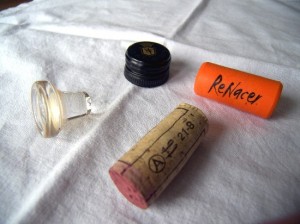 We’ve all heard the rumblings.

Corks are dying and alternative wine closures are the saviors of consistency, convenience, cost and quality.

Chances are you have encountered screw tops, synthetic corks, composite corks or glass stoppers in wine bottles at restaurants, wine shops and parties. What’s going on with alternative wine closures?

To learn more about the issues, I read the IACP Award-winning To Cork or Not to Cork: Tradition, Romance, Science, And the Battle for the Wine Bottle by George M. Taber (Scribner, 2007).

Well, my wine-loving amici, there is no comprehensive single answer to the red, white and blush question of what is going to win the battle for the wine bottle. The author documents the immense energy, time, money and research invested in the closure wars…and the battlegrounds are shifting. Here are his 2006 statistics:

Those numbers indicate that cork still has an 80% market share but “that’s down from a virtual monopoly two decades ago,” says Taber. Cork growers, particularly the Portuguese, have the most to lose. Amorim, the largest producer, has invested in technology, cleaner harvesting and manufacturing processes, and testing to try and minimize TCA-produced “corking” (that awful wet-newspaper aroma and taste emitted by a corked wine) and oxidation issues.

Now the cork industry has the tough sell, after generations of blaming wineries and consumers for tainted wines, of admitting the TCA problem and offering an improved cork closure product. END_OF_DOCUMENT_TOKEN_TO_BE_REPLACED

Serves 4 to 6
A paillard, a French term that is often seen on Italian restaurant menus, is a thinly pounded piece of meat or chicken. It cooks fast and is usually highly seasoned due to the larger surface area.

Lay the chicken breasts on a work surface. With a scaloppine pounder or heavy skillet, flatten to 1/2-inch thickness. Season with salt and pepper. Sprinkle with the cheese and bread crumbs on both sides, pressing to adhere.

Glaze a large sauté pan, stove-top griddle, or grill pan with oil. Set over high heat. Sear the breasts for about 4 minutes each side in 2 batches if necessary, or until well browned and no longer pink in the middle. Press down occasionally with a pancake turner. Remove to a tray. Allow to rest for 5 minutes. Cut into thick diagonal slices.

To prepare the salad when tomatoes are not in season, replace the basil with 2 teaspoons rubbed dried sage, sprinkling it over the chicken breasts after the salt and pepper. Replace the tomatoes with 1/2 cup recipe-ready, sun-dried tomatoes. Add 2 peeled and sliced navel oranges.
©2001, PergolaWest, Inc.