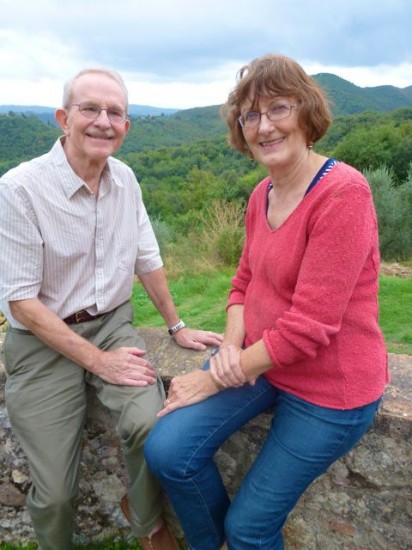 John and Peggy Heywood take a break from hiking in the hills surrounding Montestigliano.

There are magical places on earth. Places that revive happy memories and help you create new ones. Places that inspire great activity and make you feel productive, welcome, and alive.

“This whole Italy thing began about 20 years ago, when my wife Peggy and I saw a film called Enchanted April,” John says.

“We were captivated by the movie. It portrayed how a group of British visitors were transformed during a trip to Italy,” Peggy says. “We tried to figure out how we could incorporate Italy into John’s work as well as our personal lives.”

The answer turned out to be a sabbatical.

“I did my undergraduate work at Cambridge then completed my Ph.D. at MIT in 1964,” John says. “MIT instilled the sense that academic sabbaticals are excellent opportunities to achieve serious work.”

In 1997, he chaired a conference in Naples, Italy, and afterwards scouted six properties as potential venues for an upcoming sabbatical.

“Montestigliano was the hands-down winner,” John recalls. They rented a house from mid-February until June 1998 while John worked on a text book. Soon Peggy and John were living their own Enchanted April.

“Back then, the Montestigliano office had word processing capabilities and basic computer resources, and was managed by an English woman named Susan Pennington,” John says. “The day we arrived, I was crestfallen that the work materials I had carefully shipped from Boston had not yet arrived. Susan suggested that we visit the beautiful medieval town of San Gimignano. Over the years, that has evolved into our ritual first day outing.”

The couple enjoyed living on a working farm owned by a family. “We have come to appreciate the Donatis. There’s a sense of community and a true family feeling,” Peggy says. 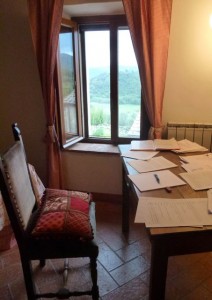 John’s Tuscan office with a view.

They were also grateful for the vast grounds. “It’s not just sound quietness, but busy quietness, too. It frees you to do what you want to do,” John says. “I was able to work hard. But I found great satisfaction in exploring the grounds and mapping hiking paths.”

“We loved the seasonal trajectory of emerging from winter into spring and early summer. We felt the weather improve and witnessed the world come to life,” Peggy says. “Those four months were the happiest of our lives.”

Within weeks, however, that glow was gone and their lives changed forever.

An ALS Diagnosis, A Different World

Shortly after they returned to Boston, the Heywood’s middle son Stephen was diagnosed with ALS. He was 29 at the time. His condition inspired brothers James and Ben, both MIT graduates, to focus upon scientific research projects to explore ways to overcome the disease. These efforts are well-documented in His Brother’s Keeper: A Story from the Edge of Medicine, written by Jonathan Weiner, and in a moving documentary film, So Much So Fast.

Within eight years Stephen died of ALS in 2006.

In 2008 John was invited to participate in a conference in Florence. Peggy and John both agreed that the conference was a must. They also felt the urge to revisit Montestigliano a week prior to the conference. But since Stephen’s illness, it was a challenging decision.

Peggy says, “It was almost like we had to come, to break the spell of not coming.”

“The moon was an orange color, the fireflies were brighter than ever, the old haunts, hiking trails, and the reunion with the Donati family were like coming home,” Peggy says. “We realized that part of our hearts were here.”

Professor Heywood retired from MIT in 2011 and has been revising his classic textbook Internal Combustion Engine Fundamentals, which is now completed.

What’s in his future? “I imagine doing more work as an artist, photographer, and writer.”

He offers a final word of advice about a sense of place. “I have an imaginary alma mater. I call Montestigliano my University of Toscana.”

“The University of Tuscany” welcomes all who seek inspiration and tranquility.

He shared a PowerPoint presentation he created, spanning his academic life, as well as offering some fun graphics about the University of Toscana. He seemed to really enjoy that his colleagues at MIT were perplexed about not being aware of the “University.”

“If you have a project to do, to be inspired for, consider a long term stay at Montestigliano. It is a unique opportunity to get work done in a focused way.”

Do you have a Montestigliano–a special place in Italy where you’ve renewed yourself?