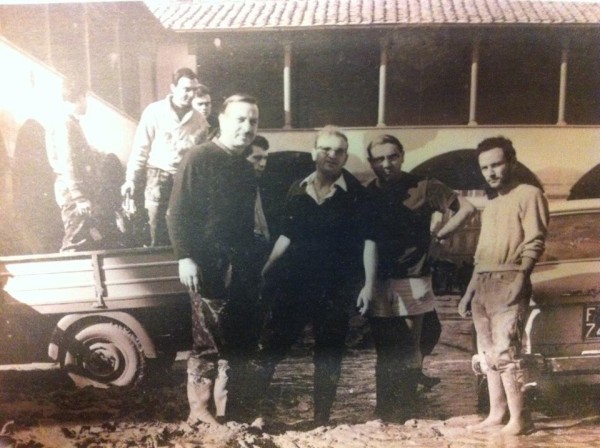 Some of the men who would become my friends in Florence labored to clean up the Santa Croce courtyard after the flood. Massimo “Max” Melani’s head is just visible (third from the left on the truck bed). On the ground are Marcello Gori (left), who was my employer at The Leather School, and Padre Franchi (second from left) who later became head of the Franciscans at the Basilica.

When I moved to Florence in 1971, the city was still recovering from the disastrous flood of November 4, 1966. High water marks—stained by mud, heating oil, and gasoline—stretched like taut ropes across building facades near the Arno.

It was harsh stuff that floated to the top. And below the crest mark, on walls around the city, were murky shadows of flood residue.

These ugly reminders faded with time, but have been memorialized with plaques designating the height of flood waters throughout the city. Five floods from five different centuries are noted by these marble plaques; none are as high as those commemorating 1966.

I worked at the Scuola del Cuoio, the Leather School,  from 1972 through 1975. The workshops and showrooms were located in the old Franciscan monastery attached to the Basilica of Santa Croce, one of the hardest hit victims of the flood. I still remember the stains, and even the faint smell of fuel, on the exterior and interior walls of the courtyard. 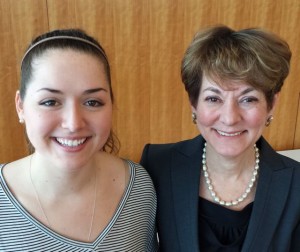 Those memories rushed back when I attended a presentation “Looking Back at the Flood of Florence in 1966: Disaster, Recovery, and Cultural Conservation,” sponsored by the Art Department and The Ideal Center of Lafayette College, Easton, Pa.

Sharon and I had met the one of the presenters, Diane Cole Ahl, Rothkopf Professor of Art History, when she curated a traveling exhibit of “Offering of the Angels” from the Uffizi at the Michener Museum, Doylestown, Pa.

END_OF_DOCUMENT_TOKEN_TO_BE_REPLACED 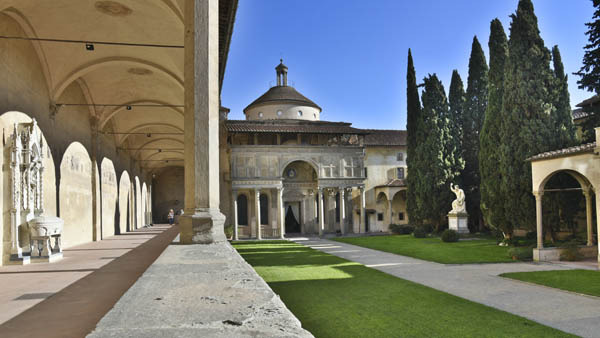 Ornate sculpted rosettes, terracotta cherubim roundels and the colourful tin-glaze terracotta by Luca della Robbia decorate the interior of the Pazzi Chapel loggia. It is built in pietra serena, a grey sandstone that, by its very nature, tends to crumble over time.

Many fortunate lovers of Renaissance art journey to Florence, but few get to the splendid Pazzi Chapel—one of architect Filippo Brunelleschi’s 15th Century masterworks–part of the complex of the Basilica of Santa Croce. If you have been to the Pazzi recently, you may have noticed the façade is in need of some repair. After 650 years, who wouldn’t need a little touch up?

The video in the Kickstarter campaign launched by the nonprofit Opera di Santa Croce paints a loving portrait of a jewel. The Opera is seeking donations to match the 50 percent of the funding it has already raised.

I’ll focus on what the Pazzi Chapel means to me. I first experienced it as an art history master’s student. Viewing it from the courtyard, I was underwhelmed. The façade looked severe, and a little top heavy, with the illusion of the tall porch and cupola being supported by impossibly spindly columns.

But there’s something transformative about entering the Chapel. I felt serenity, order, cool spatial integrity. I was amazed how hushed the interior was, muffling clamor from nearby Piazza Santa Croce. And, over time, I learned to love the façade.

Sharon and I met in Santa Croce, and four years later married there. No, not in the Pazzi Chapel but in the Medici Chapel in the adjacent sanctuary of the Basilica.

The Pazzi means a great deal to us, and we are helping to support the renovation (#crazyforpazzi).

Do you have a Pazzi story? Share it here and please consider a contribution to help restore this Renaissance treasure.