Some of the men who would become my friends in Florence labored to clean up the Santa Croce courtyard after the flood. Massimo “Max” Melani’s head is just visible (third from the left on the truck bed). On the ground are Marcello Gori (left), who was my employer at The Leather School, and Padre Franchi (second from left) who later became head of the Franciscans at the Basilica.

When I moved to Florence in 1971, the city was still recovering from the disastrous flood of November 4, 1966. High water marks—stained by mud, heating oil, and gasoline—stretched like taut ropes across building facades near the Arno.

It was harsh stuff that floated to the top. And below the crest mark, on walls around the city, were murky shadows of flood residue.

These ugly reminders faded with time, but have been memorialized with plaques designating the height of flood waters throughout the city. Five floods from five different centuries are noted by these marble plaques; none are as high as those commemorating 1966.

I worked at the Scuola del Cuoio, the Leather School,  from 1972 through 1975. The workshops and showrooms were located in the old Franciscan monastery attached to the Basilica of Santa Croce, one of the hardest hit victims of the flood. I still remember the stains, and even the faint smell of fuel, on the exterior and interior walls of the courtyard.

Those memories rushed back when I attended a presentation “Looking Back at the Flood of Florence in 1966: Disaster, Recovery, and Cultural Conservation,” sponsored by the Art Department and The Ideal Center of Lafayette College, Easton, Pa.

Sharon and I had met the one of the presenters, Diane Cole Ahl, Rothkopf Professor of Art History, when she curated a traveling exhibit of “Offering of the Angels” from the Uffizi at the Michener Museum, Doylestown, Pa.

Using archival photography and dramatic before-and-after photos, Ahl framed the historical context of the flood. She illuminated the contributing factors: the seven inches of rain that fell in less than 18 hours preceding the flood; extensive deforestation upstream along the Arno that had gotten much worse since Leonardo da Vinci first warned about it half a millennium earlier; and the mismanagement of dams upriver that were opened to relieve flooding to the east and north.

Ahl offered a brief survey of the world-famous treasures damaged by the raging waters. She marveled at the response of thousands of volunteers, mostly students, from all over the world. These angeli del fango, the mud angels, worked countless hours under the direction of experts to help salvage art from the muck and begin the tedious cleansing and drying process to recover the works. She emphasized how the Florence flood put a spotlight on the importance of artistic and cultural conservation. 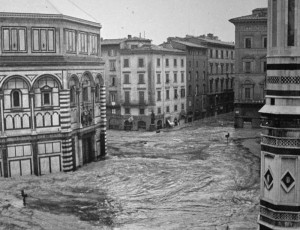 Metelenis took over the podium next. She had studied art in Florence and Venice, and her keen interest in art restoration was apparent.

She shared images of techniques and processes used to restore three different types of artistic media from the period: wood, bronze, and fresco. She focused upon restoration efforts of the wooden Cimabue Crucifix, the bronze Ghiberti Doors of Paradise, and Taddeo Gaddi frescoes, Last Supper and Tree of Life.

Metelenis was staggered by some of the primitive “restoration techniques” she saw in the photographs from 1966: like a gang of workers manhandling the Cimabue crucifix out of Santa Croce, then the same work of art being doused with chemicals from a hose as part of the restoration.

She did acknowledge the importance of the work achieved in Florence after the flood in helping to shape the future of art restoration. And she built on her professor’s baseline argument about the importance of cultural conservation.

Next time you visit Florence, look for the flood markers on walls. Although the staining has faded, the memories have not.

Following are some resources that offer different perspectives on the great Florence flood of November 4, 1966.

Does anyone have memories or comments about the great flood? Share them here.

« From Italy to Your Table
Lasagna alla Bolognese »